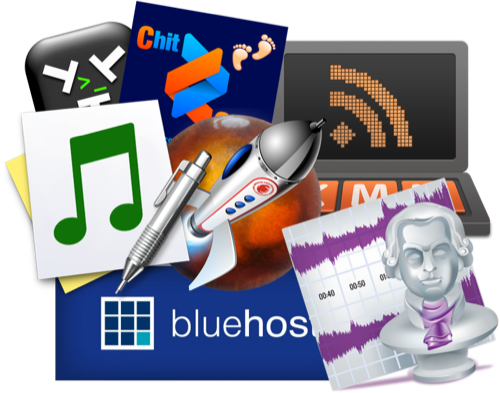 I don’t like change.  When I finally decided to spin off Chit Chat Across the Pond into its own podcast I told you about all the things I haven’t changed in my life in decades. But once you start changing things, it gets easier and more tempting to keep changing things up.  It’s almost like change causes more change.  You’ll see in this story that it was a cascading effect that has really gotten me  out of my comfort zone but I’m enjoying the ride.

Since I was changing the podcast, it seemed like a good idea to change my recording software at the same time. Instead of GarageBand, I started using Amadeus Pro.  Instead of using iTunes to add the ID3 tags I started using ID3 Editor.  ID3 tags are those are the little bits of information about the audio file, like my name, the fact that the show is clean, and the artwork. I chose ID3 Editor because it had a scriptable command line that would make Dorothy squeal with delight. Levelator, the software that I use for making the audio levels consistent broke in El Capitan but I had just changed over to using Auphonic to level the audio (and bring it up to loudness standards) so that was yet another change.

Well if the podcasts have changed, we’ve got new artwork, three new applications for the audio, maybe I should rethink how I write the blog posts.  For a decade I’ve been using Feeder from reinventedsoftware.com to create my giant blog posts of doom (™ Donald Burr) but it wasn’t really designed for this particular task, it’s designed to create the podcast feed that delivers the audio files to you.  Feeder is still essential to the podcast process, but it was time to torture another developer with my blogging needs.

So I bought MarsEdit from http://red-sweater.com.  MarsEdit is pretty cool and I’ll go into it more later, but it’s designed to write blog posts, add images (I used to FTP them by hand and then link to them even though Feeder could have handled that) and helps with easy categories and tagging. Remember when I said the first change caused a cascading effect of change? You would think changing my blogging software would have no effect on my web server hosting plan…but you’d be wrong.

When I first ran MarsEdit, it pulled down all of my existing content so that it was in sync with my entire website which was awesome. But think about how much data is on podfeet.com after more than a decade!  Downloading all of that content caused a ton of remote procedure calls, which my web hosting company, Bluehost, thought was an attack so they blacklisted my IP address from my own website!

I’m not blaming them, in fact I’m VERY glad that they have protections against remote attacks like this. I called them up and they let me back in. They said they could whitelist me for 72 hours but if it started happening again I’d have to call back.

I chatted with Daniel, the developer of MarsEdit about this, and he suggested I have my host whitelist the user agent string for MarsEdit.  Back to the Bluehost I went, but they explained that because I was on a shared hosting plan that wasn’t possible because it would affect other domains.  A while back I upgraded from “regular” shared hosting, which is thousands of sites on one physical server to Pro shared hosting which is only ~400 sites on the same server.

My new best friend Cody at Bluehost asked whether I’d considered a dedicated host. I knew that was about 5X the price so I said no, but he suggested a VPS, or Virtual Private Server.  This is just like the virtual machines we can create on our Macs and PCs; they host several virtual machine servers on a single box. When you create a VM you dedicate a specific number of processors and RAM to each virtual server, which means you’re not sharing those resources with anyone else..

Cody checked the pricing and told me that it was only about $5/month more after some fees I’d have to pay up front. That sounded great to me. I’m going to fast forward through a few things here, but here’s a couple of important bits.

Cody suggested we do the transfer to the VPS in the middle of the night, but evidently did not understand quite how this works. In the morning I was greeted by a tweet from alert NosillaCastaway Michael Price showing me a blue screen indicating that podfeet.com was unavailable.

It turns out that even though I was paying for a static iP, they had moved me to a different static IP on the VPS. A quick call to Bluehost who explained what happened, jump over to my domain registrar GoDaddy and change the A-Record and we were back in business.

The scary part though was something else he didn’t know. When we talked about the VPS, I absolutely asked him whether they were still my system admins for this server, and that they would keep it all patched up and such. He was wrong. I discovered AFTER the server migration that Allison is now a Linux System Admin.

Well, even though I have tamed that terminal and all, I am NOT a Linux admin! I considered dialing back to the old plan, but I had already fallen in love with how WICKED fast podfeet.com had become! Seriously, whatever you’re doing right now, go over and click around on the site, you’ll be AMAZED at how fast it is!!! I couldn’t bear to give that up.

I then realized that I know a Linux sys admin who I would trust with my website, so over the next year, Bart says he’s going to teach me to care for it myself.  We’ll see how well THAT works out for him in the long run!

I almost forgot, one more cool thing about the VPS, I get a terabyte of bandwidth, which means I could potentially host the podcast files on my own server, cutting out Libsyn!  This would help me partially recoup the costs of the VPS.  I’ve got to do some ciphering on how that would work though because there’s a 30GB cap on storage but I think it could work. I might also just start hosting the files over on archive.org. It’s not the fastest downloads on earth but Tom Merritt hosts his files there so if it’s good enough for his level of traffic, I bet you guys wouldl be ok with it!

7 thoughts on “Change Everything At Once”