I was born with a really well developed left brain, the side associated with logic. Science and math came easily to me and it was natural that I went into engineering as a result. My three brothers were also reasonably bright boys, but they were gifted with artsy fartsy skills associated with a well developed right brain. My oldest brother is a musician who reads books on string theory if you can picture that! Alas, I was the only one not musically inclined (even after 6 years of playing the flute and picolo) and with zero artistic talent.

However, like many of you out there, I always wished I could draw and paint. When Apple announced the iPad Pro and the Pencil, I wondered whether I could become an artist?  If I just had the right technology, talent would suddenly exist in me, right?

I’m being silly of course, but sometimes tools that remove friction can help us become more creative. Let’s see if we can walk through a scenario to test this hypothesis.

I went on a walk with our dog Tesla in a local park and she paused at the top of a hill with this very regal look about her. I pulled out my iPhone and got down low to compose a photograph so she was framed nicely against the sky. She looked fabulous with her golden fur and bright eyes up against the dusky afternoon sky.

When I got home and looked at the photo, it was unremarkable. The camera sensor didn’t have the dynamic range of my eyes so Tesla was almost a silhouette in the photo instead of what I remembered.

As you know I’ve been working with MacPhun’s plugins and standalone applications for Photos and I’m really impressed with them. Several of the apps support layers and masking so that you can apply effects to just certain portions of the images. In order to apply the mask you use two selection tools, the brush and the eraser. Using a trackpad or a mouse works tolerably well but it’s easy to get a glow around the edge of objects because you just can’t select regions precisely enough. The Apple Pencil would allow us to select areas precisely, but my precious Macphun tools and other extensions aren’t available on the iPad. There must be a way to bring these technologies together.

I brought this up to Mark Pouley (aka @TLI_Mark) and he told me about an app called Astropad that’s designed to make your iPad, iPhone or iPad Pro into a graphics tablet for your Mac. Wired or wireless, Astropad mirrors your display and has support for the Apple Pencil. This might be just what we need.

There are two apps to download, one for the Mac and one for the iPad. The Mac version is free, while the iPad version is $20 in the App Store. That’s pretty steep but if you add up the cost of the Mac, the iPad and the photo editing software, $20 really isn’t that much IF it can do what we want.

I bought Astropad before I got the Apple Pencil or the iPad Pro, simply on Mark’s suggestion. I tested it on my iPad Air 1 with my 12″ MacBook and with the Noiseless plugin from Macphun. I may have picked the hardest possible combination for Astropad. I started with a laptop that while new, is not a powerful machine. Then I added in a 2 year old iPad with the A7 processor. The meanest thing I did was select Noiseless as the application on which to test this setup. I’ll explain why.

Noiseless, as the name implies, removes noise. The graphical interface is really cool. It lets you view your image with and without the noise reduction shown on either side of an orange line. If you slide the line back and forth it updates real time (or near real time, repainting both sides. You can leave the line still and slide the photo around with respect to the line to check out different areas of the photo, and you can zoom in and out. If it’s a huge photo on a slower machine, it sometimes shows you a little progress bar going across before it does a repaint.

Now think about what we’re asking Astropad to do: it’s constantly repainting the screen from the Mac to the iPad too. The result is that you can see the refresh of the screen which really bothered me at first. Astropad is considered one of the best apps for how little lag it as, but this isn’t technically lag, it’s the refresh rate.

When I got my smokin’ fast iPad Pro, I hooked it up to my 2014 15″ Retina MacBook Pro with gobs of RAM and dedicated graphics card, the lag was pretty much unchanged. Yet again the poor misunderstood MacBook is accused of being slow when it wasn’t at all!

Another bit of trouble I had with Astropad was how to size how much of the screen on the Mac was reflected onto the iPad Pro. On the Mac you get a dotted rectangle that you can resize but it’s nearly impossible to make it the right size for the iPad. Mark then told me that if you start on the iPad it’s a lot easier. Really unintuitive interface, but you put your finger on this little circle on the iPad app in Astropad, and then while holding that down, use two fingers to pinch and zoom the image and pan it around. I sure never would have figured that out on my own!

I set Astropad aside and waited till I got my Apple Pencil. And that was when the magic started to happen. I pulled my photo of Tesla into Intensify CK (as a plugin to Apple Photos) and launched Astropad on both the Mac and the iPad Pro. In Intensify I created a new layer mask just around Tesla so that I could increase the exposure and saturation on just her and maybe the ground she was standing on and yet leave the sky exposed as it already was.

I told Astropad that I had an Apple Pencil and suddenly I was able to create the mask with incredible precision. I could go back and forth between the brush and the eraser, making smaller and smaller movements, I used my trackpad on the Mac to zoom in really close so that I could make even finer adjustments. It was a dream to do it this way! 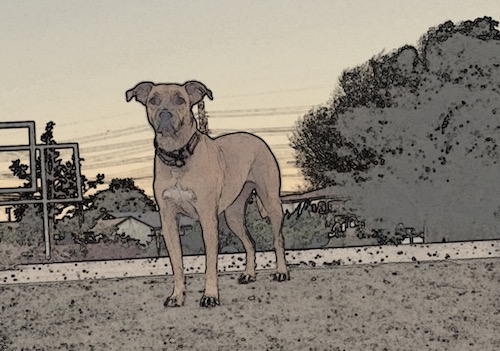 When I was happy with the exposure, I saved changes back into Apple Photos. Next I duplicated the image (just in case) and used another Photos extension from Macphun called FX Photo Studio. This is a filter app and to be perfectly honest I’m not a huge fan of filters because they can be over used. From time to time it can be fun though as long as you exercise moderation. I found a filter called Pencil Paint and applied it to the well-exposed photo and it came out GREAT! It looks like a colored pencil sketch and I think it’s really pretty.

I may never be an artist in a traditional sense, but it takes a certain amount of creativity to put the pieces together and create art so I am going to declare victory. Maybe if I get the Apple Keyboard for iPad Pro I’ll write a novel!

9 thoughts on “Will the Apple Pencil Make You an Artist?”