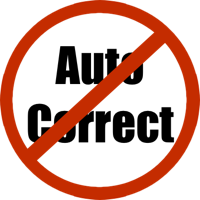 When spell check first came out, it was a wonderful thing. Those nice squiggly lines showing us our typos was glorious. I’m a really good speller but I do make typos so having that visual indicator was great. For some reason I can spot typos a mile away in anyone else’s writing, but my own are completely invisible to me.

Then came auto-correct. At first we heralded it as a revolution, a time saver, something about which we rejoiced. Then came the humorous auto-correct stories. We mocked it, we rejoiced in other people’s failures, but we secretly grew to depend on it more and more.

In spite of these great tools to find our mistakes and correct them, my blog posts are often riddled with mistakes. I’ve mentioned that I love it when people point them out because I simply cannot see them in my own writing, unless I read them out loud and I’m too lazy to do that ahead of time.

Recently I started using Telegram for my messaging app and oddly the Mac app doesn’t have auto-correct, while the iOS and web apps do. At first I thought that was a bad thing, but then I realized how freeing it was. I love to write things like, “I’m sooooo jealous” with 17 o’s, but auto-correct would always want to change that. I like to write prolly instead of probably. I don’t know why, it just makes me happy. I might want to write gonna instead of going to, but stoopid auto-correct won’t let me. Oh yeah, I also like to write stupid with two o’s instead of a single u. In Telegram I was free to spell the way I wanted to spell. 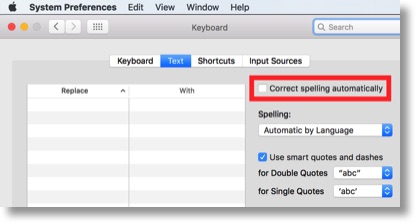 That gave me an idea. Why am I a slave to auto-correct? Why have I accepted this tyranny? I went hunting in System Preferences, Keyboard, Text, and found a lovely checkbox that said “Correct spelling automatically”. Note that I’m still letting it check my spelling so it still tells me I’m an idiot if I put too many o’s in the word “so” but it doesn’t change it to what it thinks is best.

I’ve been running with auto-correct turned off on my Mac for about a week now and I LOOOOOVE it! It’s as wonderful as I hoped it would be. You know how I’m always saying that I love it if people tell me about typos in my blog posts? I really think you will see fewer mistakes now because I’m in control now. I think with auto-correct on, Apple changes my typos to real words it thinks I meant to type, so I wasn’t getting the squiggly lines that told me I made a mistake, so I couldn’t see the mistakes. That’s my theory anyway. It got put to the test this week with Steve checking my AppleTV post, and he found one typo (he usually finds a lot more) and it was me just ignoring the squiggly line.

Armed with my new freedom, I raced to my iPhone and turned off auto-correct there too. I figured it would take some getting used to so I kept it off for about 3 days…and I couldn’t STAND it! Back when Steve Jobs, in talking about how to type on iPhone, said to “just trust it”. Many mocked him for that and it took me a long time to trust it, but it really does type remarkably well if you just let it do its thing. Auto-correct off on iOS was a disaster, even though I could tap and hold a word to choose a correction. It took me twice as long to type out a single sentence without it.

I don’t know if anyone else is like me in this, but I throw it out to you. Really think about whether auto-correct helps you or whether it constrains your creativity. Don’t be a slave to auto-correct!