NosillaCast News is now called Podfeet Press, sign up at podfeet.com/blog/podfeet-press-signup/. Check out the screencast I did on Don McAllister’s ScreenCasts Online about Macphun’s Intensify CK: screencastsonline.com/mac/show/0527/. My review of the new AppleTV is mostly pros, with some cons. We say goodbye to long term sponsor Clarify from clarify-it.com. I tell you how I abandoned auto-correct on my Mac and how happy it makes me. I try to justify why I bought the new Apple Magic Keyboard and Trackpad 2 and tell you whether they’re magic or not. 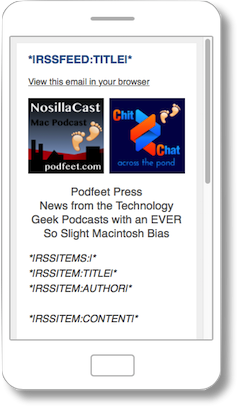 Hi this is Allison Sheridan of the NosillaCast Mac Podcast, hosted at Podfeet.com, a technology geek podcast with an EVER so slight Macintosh bias. Today is Sunday November 1, 2015 and this is show number 547.

I think I should mention at the beginning of the show for a while till everyone catches up that I have recently split the NosillaCast into two shows, the traditional part I do alone and the interview part, Chit Chat Across the Pond is now it’s own standalone show. This means it will be way easier to point people directly to one interview and will help if you ever want to go back to something you heard and listen again. For example, Kevin asked if I could point him to the episode where Pat Dengler talked about becoming a member of the Apple Certified Network. I had to hunt through all kinds of other information to find it but if it had been one of the new, standalone episodes that would have been much easier. If you want to hear both shows, you need to search for Chit Chat Across the Pond in your favorite podcatcher.

I’m still cleaning up some “bits and bobs” as Bart would say, like figuring out what to do about the NosillaCast News, which gives you a newsletter whenever the NosillaCast comes out, including the show description and relevant links. People really like it (especially since there’s an easy way to unsubscribe if you don’t), but what about Chit Chat Across the Pond? I asked your advice in the Google Plus community and we decided to make the newsletter come out whenever there’s a Chit Chat Across the Pond or a NosillaCast. We decided that we liked the alliteration of NosillaCast News, but needed to incorporate Podfeet instead, and while Allister wanted us to call it “Princess Podfeet’s Pontifications”, we decided to go with the milder form and call it Podfeet Press.

The good news is that once I get all this set up and working, it works great. I use a tool called Mailchimp which for some reason is free. I create a template and a list of people to receive it, and every night at 9pm it checks to see if I’ve released a podcast and if I have, it generates the newsletter for you. Pretty slick. Except I have a LOT of trouble understanding how to mess around in the templates! Remember it took me weeks to make the text play nicely with mobile a few weeks ago? Well I THINK I have the newsletter set up properly for a combined feed of the two shows, but for all I know you’re going to get a bunch of gibberish code in the mail. I’m betting someone will tell me if that happens. Fingers crossed because I can’t tell until it goes out!

By the way, you’ll still get notifications of any kind of big news (like my web server being down, cancelling the live show) as well as notifications when the two shows come out. Hope that makes everyone happy!

I spoke a bit on the show about the Creative Kit 2016 Macphun extensions for Photos, and if you want to learn more in depth about them I did a screencast for Don McAllister’s ScreenCasts Online this week. I do a deep dive into my favorite of the suite, Intensify CK this week and in a couple of weeks I’ll be going through the rest of them in one additional show. You can see the trailer for the Intensify CK video at screencastsonline.com/mac/show/0527/ and watch if you’re already a member, or if you’re not you can get a free 14 day trial for ScreenCasts Online.

Remember last week when I told you that there were 3 of you left who hadn’t yet bought Clarify? Well evidently there’s only one of you left now, so this is the very last ad for Clarify. I’ve really loved advertising for the guys over at Bluemango Learning. Greg and Trevor, the developers have been great supporters of the show and have created a product you know I really love. I did a Google search to see how far back we go on Podfeet.com and I found the first time I heard of these guys. It was February 24, 2008 when Research Assistant Niraj told me about their product ScreenSteps Desktop, which later morphed into Clarify. I should mention that ScreenSteps is alive and well and in fact now that Clarify is working great for the consumers, they’re putting the full court press on supporting their enterprise solution with ScreenSteps.

In all these years, I’ve never had a week when I didn’t have a story about how ScreenSteps or Clarify saved the day. Many of you have sent in your testimonials on how it helped you look like a hero to your friends and family or maybe helped you remember how to do something. On Podfeet.com I have a zillion tutorials I’ve posted over the years that continue to help others. I have a feeling that from time to time I will still mention Clarify and you’ll know that I meant what I’ve said all this time. That’s when Greg and Trevor will figure out that they could have stopped paying me a long time ago.

Unless something good comes along that I can endorse 100%, this will be an unsponsored show, so the Amazon Affiliate link and the Paypal donation buttons over on podfeet.com will become the only source of income to support the show. As you head into the holiday shopping season, please consider using the Amazon link – it sends a small percentage to help the show but doesn’t cost you a nickel more.

That’s going to wind this up for this week, many thanks to our sponsor for helping to pay the bills, the makers of Clarify over at clarify-it.com. Don’t forget to send in your Dumb Questions, comments and suggestions by emailing me at allison@podfeet.com, follow me on twitter @podfeet. Check out the NosillaCast Google Plus Community too – lots of fun over there! If you want to join in the fun of the live show, head on over to podfeet.com/live on Sunday nights at 5pm Pacific Time and join the friendly and enthusiastic NosillaCastaways. Thanks for listening, and stay subscribed.