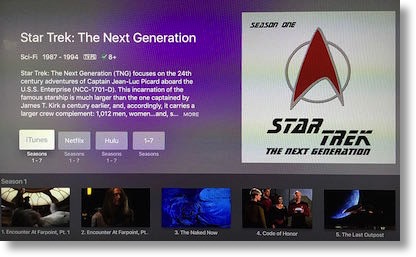 Steve and I bought the first generation Apple TV and we disliked it so much we sold it to Jonathan Cost for $50 just to get it out of our house. We bought gen 2 and 3 and liked them quite a bit better. Our use is split between Airplay (video podcasts thrown to the TV from an iPad) and renting movies on iTunes. There’s some Netflix here and there but we tend to reach for the Roku for Netflix a little more often. We also use it to watch the Apple Keynotes but of course that’s only a couple of times a year.

We definitely do not NEED another Apple TV but we were definitely swayed by the cool new remote. Even if the old Apple TV remote wasn’t the worst piece of doodoo Apple had ever invented, the new remote has some wicked cool features, like Siri search that were just too compelling to ignore. The interface of the new 4th gen Apple TV looked pretty too, and the possibility of cool new apps sounded swell.

Steve preordered the Apple TV and chose the 32GB version over the 64GB one, mostly because from what we’ve heard, the storage is mostly required for game data and we’re not into gaming. We also figured if it was too small, that would give us an excuse to replace another older Apple TV with a new one, right? Got to think ahead to come up with your excuses! 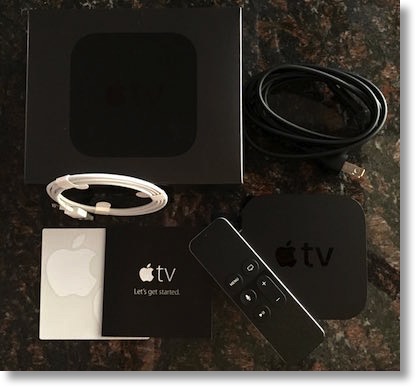 The ordering process really irritated Steve. Most Apple products have come with free shipping, but he had to choose between standard shipping and an expedited shipping of $17. That would have maybe made sense, but there was a significant overlap between the dates of shipping, AND even expedited shipping didn’t guarantee he would get it on release day, Friday 30 October. He went for the slow boat shipping.

So of course we went and bought one on release day. We’ll put all that shipping angst behind us and talk about the new Apple TV.

In the box you get the new remote, a lightning cable to charge the remote (that’s a nice touch and a $17 value!), the Apple TV itself, and a power cable. The new Apple TV is about a third thicker than the older models but the same footprint. We swapped out our 3rd gen for the new 4th gen and fired it up.

The initial setup was really cool. Since this device will be talking to your iCloud account, you’re offered the option of using an iOS device to hand off the appropriate settings to the Apple TV. It says you can add your Apple ID and Wi-Fi settings to the Apple TV. All you have to do is make sure your iOS device is unlocked and with Bluetooth on, and you simply put it near the Apple TV and the Apple TV is configured automatically. Pretty sweet. I was so very happy to not have to type in my long, complex password I got from Bart’s XKPASSWD tool. Worked perfectly – got a notification on the phone asking me if I wanted to configure the Apple TV and it was done.

Next the Apple TV wanted to know if we wanted Location Services turned on. We couldn’t think why we’d want that so we declined, but I noted one really good thing. Neither option was the default. That means you have to actively choose to enable location services. Good move, Apple. Next was Time Zone selection which was my first opportunity to use the touchpad on the AppleTV. While it was not as heinous as using the old remote, typing in the name of my city was still really irritating. The letters, instead of being in a grid, where you could move efficiently around, are one long, horizontal line from left to write across the screen. It was pretty and made nice popping little graphics to entertain me but it was tedious.

Next up, it asked if we wanted to use Siri. Again, Apple did not default this to use or don’t use Siri, you have to be an active participant in whether you want Siri to listen to you. I should mention that the Apple TV remote has a dedicated Siri button, so it is not listening to you at all times. You have to press and hold the button for Siri to be able to hear you.

Just to entertain you, the Apple TV asks if you want to automatically download the Aerial screensaver, which is HD video from beautiful locations around the world. It tells you this will be around 600MB of downloads a month and you can change it at any time. Again you have to actively choose to download or not. We have to justify our next, bigger Apple TV so we said yes.

Finally it asked if we want to share app analytics with developers (I actively chose to share) and then I had to agree to the warranty page showing 1 year. It always makes me sad to see that knowing that in Europe they are guaranteed 2 years by law. Oh well.

Finally the Apple TV was configured and it was gorgeous. The VERY first thing I wanted to do was test Siri search. From what we’d been told, it could find things across all services that have hooked into their API, unlike the Amazon Fire that searches Amazon but not Netflix.

I did what any good NosillaCastaway would do, I held down the dedicated Siri button and said, “Show me Star Trek Next Generation”. It found it immediately and then offered to show it to me in iTunes, Netflix and Hulu. I was free to choose any of them. I searched for Homeland and that time it found it in iTunes and Showtime. Search across services works like a champ. 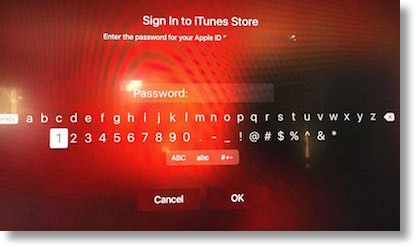 Now it was time to go get me some apps since I didn’t have Showtime or Netflix yet on my Apple TV. I went into the App button and chose Netflix. It had a little Install button and I was in business. But then I went into the Netflix app and it made me log in. My son set up the account and he has a super long email address AND a really nice, long, complex password with letters and numbers and punctuation, just like I taught him. No worries, I can just open up my iPhone, launch 1Password, put down my fingerprint, copy the password, then flip over to the Remote app that sees all 3 of my older AppleTVs…except it doesn’t work with the new Apple TV yet. CURSES! Two tries and 7 minutes later and I was in business.

In the app store, some apps say “install” like Netflix did and you can simply push that button, but some say “Get”. If you click on Get, instead of installing immediately, it makes you enter your gosh-darned Apple ID credentials! The only thing worse than Kyle’s username and password is my Apple ID and password! And remember how cool it was that I was able to use my iPhone just a few minutes ago to authenticate with that very same gosh-darned Apple ID??? I spent another 3 minutes typing THAT password in again, swearing under my breath at the devs of the Remote app for not getting that thing ready for me.

I’m going to be keeping a close eye on storage for a while but so far it looks like we will probably be fine. I installed four apps, and in Settings I took a look at manage storage. Netflix was 12MB, Periscope 5MB and both NBC and YouTube were both under a MB. Oddly it didn’t show me the Aerial screesaver in the storage listing which would have been nice. They said it was on average 600MB/month of downloads but I can’t see how much instantaneous storage it takes up. 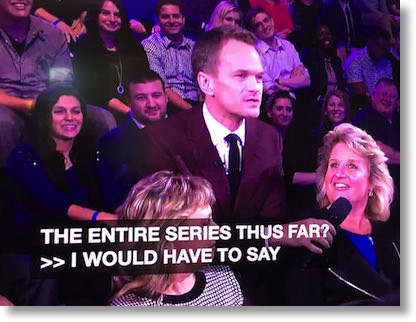 Let’s get back to the remote because it is just as happy making as I hoped it would be. An unexpected pleasure was that I can control the audio volume with the Apple TV remote. We have our Apple TV plugged into a Dolby 7.1 stereo receiver via HDMI and then the receiver sends one HDMI signal to the TV, so it’s pretty cool that the Apple TV can now control that audio level. Once we start a movie we will only need one remote.

Finally one of my favorite things about the Apple TV with Siri and the new remote is that at any time you can hold down the Siri button and say, “What did he say?” and the show backs up 15 seconds and plays back with subtitles turned on! Our Roku does turn on subtitles when you back up 15 seconds but this is a cooler implementation.

And on the subject of subtitles, turning them on at all on the the old Apple TV was a giant pain. If you were watching a movie, you had to back completely out, dive 62 levels deep into Settings, back out of that, and then try to get back to your movie and play. Now you simply ask Siri to turn them on and off for you. This makes me so happy!

Bottom line – I love the new Apple TV, mostly because of the new remote with Siri, and I have a feeling we’ll be buying more of these over time!