I was very excited when the new Apple gear got announced this year. While I wasn’t going to get an iPhone 6s because it was Steve’s turn, I was still really looking forward to getting a new AppleTV and a new iPad Pro and it’s new keyboard and especially the Pencil. But the months have gone by and I still didn’t have ANY new toys to play with. Watch OS2 and iOS 9 and El Capitan were mildly entertaining for a day or two, but there was nothing ground breaking there either. I was bored.

So when Apple announced the new Magic Keyboard and Magic Trackpad 2, I thought, why not? You’ll notice I haven’t framed a problem to be solved other than boredom, so let’s see if we can back into some justification. Work with me here, ok?

Many of us have moved away from wired input devices in favor of wireless keyboards, mice and trackpads. We’re far too ecologically minded to use disposable batteries so we’ve become masters at rechargeable batteries. We have rotation schedules with multiple battery chargers, we’ve kept metrics on which batteries are best, and have at least read, if not participated in, lengthy discussion online of our opinions on the subject. mAh is a household word for us.

Last year I fell in love with the Mobee line of products that replaced the standard AA batteries in my Apple wireless keyboard and trackpad with the little “magic bar”. That allowed me to slide the bar and keyboard into a little charger on my desk whenever the battery got low. Over time though I’ve become less enchanted with the Mobee line of products. Great engineering ideas, but their quality isn’t what it should be. The batteries don’t last very long at all; I find I’m charging every 1-2 weeks. The micro-USB cable slot isn’t very secure either, so I’ve had to resort to taping the cable in place which is kind of a mess.

The next thing I thought about in trying to justify why I needed to spend this money is that over the last few months, I’ve really come to enjoy the short throw of the keys on the 12″ MacBook keyboard. It took me a while but I have found myself sitting in front of my MacBook Pro on my desk with the Apple wireless keyboard, but leaning over to the left to type on the MacBook instead. The keys on the desktop keyboard feel grotesquely exaggerated to me, because they move way too much. If that isn’t a third world problem, I don’t know what is.

I’m a huge fan of the Magic Trackpad, and I never thought I would be. We all used to immediately buy a mouse to use with our Mac laptops when we sat at our desks. Of course most of us didn’t use the Apple mouses because they’ve traditionally been pretty awful. I’m not sure how I converted to intentionally using a trackpad instead of a mouse, but I can’t stand using a mouse now. Steve is on the other end of the spectrum, but he’s wrong and I’m right. Apple’s trackpads are way better than any mouse.

Justifying a new Magic Trackpad is a little harder than the keyboard, except for the pesky battery issue. I never thought the original model was too small, or that the color matched my MacBook Pro too well. 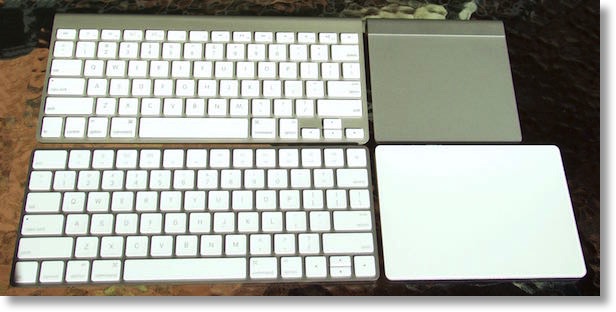 Armed with this incontestable list of excuses, I bought the Magic Keyboard & Magic Trackpad 2. I hate Bluetooth for how dodgy it is, but both of these devices paired instantly when I turned them on. I understand that if you don’t want to bother with the menus for pairing you can simply plug them into your Mac via a Lightning cable, but since I keep Bluetooth in my menu bar, it was easier to just use the pull down menu. By the way, turning them on is now a very distinct little slider switch on the edge that’s away from you. No more wondering whether that round button has been accidentally pressed in your backpack if you tote these around.

The first thing that surprised me was how big the Magic Trackpad 2 is. You may have heard that it’s about 30% bigger than the old and busted Magic Trackpad 1, but that’s misleading. The usable area is 30% bigger, but the total area it takes up on your desk is only 8% bigger. On the old one, the top .8 inches is part of the battery holder and is unusable space. The old one is pretty square at around 5.1 x 4.5 inches, while the new one is a landscape rectangle at 6.3 x 4.5. Like I said in my “excuses to spend money” section, I’m not sure I needed more space on my trackpad but it doesn’t hurt anything.

It’s also white instead of silver. I have no idea why they did that, unless they’re in cahoots with the electronics cleaning products companies. It doesn’t match my silver MacBook Pro or my space grey MacBook, but it does go well with the white keys on the keyboard.

What I do like about the new trackpad and the trackpad on the Macbook is that it’s not a mechanical click. It’s electronic with haptic feedback but you would swear that it IS clicking mechanically. If you don’t believe me, go check one out and click it while turning off the switch on the back. The clicking will stop. It’s freaky!

Like I said earlier, the main reason to get the Magic Trackpad 2 is for ease of charging. I haven’t had it long enough to test the battery life, but they promise a month before you’ll need to recharge. That will be lovely. It’s also lovely that it charges via the included Lightning cable! That’s right, a $17 value right there. If you don’t have a trackpad yet and you think you’d like one, I think the Magic Trackpad 2 is lovely with its large glass screen and easy charging. But if you don’t have $129 burning a hole in your pocket and you already have Trackpad 1, don’t lose sleep that you don’t have it.

Now for the Magic Keyboard. The Apple wireless keyboard of yore (the non-extended one) also had about .8 inch of useless space at the top edge for the battery, and on the new keyboard they simply chopped that off. Some have complained that it’s harder to grab without mashing the keys but it doesn’t seem that hard to pick up to me. The keyboard is significantly flatter than the original with the back end down about 30%. Time will also have to tell on whether this will be ergonomically sound.

I absolutely LOVE the touch of the keys. They don’t click, but they’re not mushy. They feel just right to me, and I think my muscle memory between my MacBook and this keyboard will be very happy. I’m a touch typist (I’d have to be to write as much as I do!) and my typos are at a real minimum with this keyboard.

At $89 it’s about mid range for a good keyboard but remember that it also comes with a $17 Apple lightning cable. If you think about what you’re spending on chargers and rechargeable batteries, I think the Magic Keyboard with its 1 month battery charge will actually start to save money over time and will be more convenient immediately.

6 thoughts on “Are They Magic?”