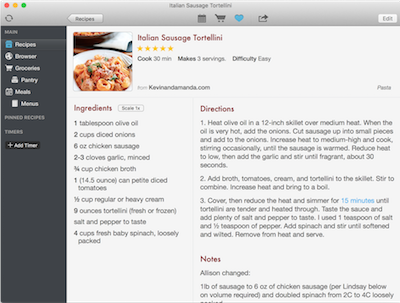 I’m not a chef and I won’t even suggest that I’m an accomplished cook. In fact, it’s well known that Steve and I have been eating on a repetitive schedule for going on 20 years. Our kids first pointed it out when they noticed that we had made burritos every Monday for a very long time. It has been suggested that this is what happens when two engineers marry.

Like most kids, when our daughter Lindsay moved out on her own, she rebelled against her rigid upbringing and decided to try to cook two new meals every single week. She has inspired me over time, sending me the easier recipes in a quest to get me to break out and experiment.

One way we’ve started to share recipes is with a fantastic application called Paprika Recipe Manager from paprikaapp.com. Paprika is available for the Mac and iOS, as well as Windows, Android, the Kindle Fire and the Nook Color.

Years ago I used the Yum application and would share recipes with my friend Lynn. The app got bought by another company and dropped so I moved to Mac Gourmet, but they dropped support as well. I finally bit the bullet and switched to Paprika. They made it super easy by allowing me to easily import my VAST library of nearly 20 recipes form Mac Gourmet.

A standard feature of a good recipe app these days is the ability to import recipes from the web. Before Paprika, Lindsay would go to her pinned recipes in Pinterest and read right from the web. Now she says she won’t even consider making a recipe on a website before bringing it into Paprika because the formatting is so pleasing, with ingredients on the left hand side and directions on the right. On websites they usually have the ingredients at the top so you have to keep scrolling up and down which gets old fast.

Lindsay says that the built-in web browser in Paprika is her favorite part of the app. She finds a recipe online, copies the url and pastes it into Paprika’s browser and, with the exception of the very first recipe she tried to import, all of them have simply swooshed right into Paprika with the push of a button. If you do find a recipe that doesn’t swoosh properly, you can highlight pieces of the recipe and then push a corresponding button to pull it in manually. For example, highlight the ingredients and push the ingredients button. Easy peasy!

Another benefit for Lindsay in using a recipe organizer is that she can edit the recipe and never have to remember how she modifies it. In the past, going to the web each time, she would forget what modification she’d made. Paprika includes a Notes section so when she sends a recipe along, she often gives me some tips like how she reduced one ingredient, or a substitution I might like. I’ve started adding my own notes after I make a recipe too.

When Lindsay and I were walking through the features of Paprika for this review, we discovered on the Paprika website that you can create a bookmarklet for your browser. Now instead of copying and pasting a recipe from our web browsers into Paprika’s browser, we can simply tap the bookmarklet and the recipe is instantly saved into Paprika. Awe. Some.

Paprika supports organization of your recipes through categories you can create but doesn’t have Smart Categories. I would’ve liked that, but of course my only smart category would have been “came from Lindsay”. You can rate your recipes from 1-5 stars, and you can view only your 5-star recipes in the “Top Rated” section. If you prefer hearts, they have Favorites as well. Not a fan of stars or hearts? How about pins? You can pin a recipe to the left sidebar so that it’s even more accessible when your’e ready to cook.

I’m a huge fan of their scaling of recipes. No longer will you be pulling out your 3rd grade math text book to try and take 2/3rd of 3/8ths of a cup of flour; Paprika will instantly convert the recipe to the number of servings you desire.

With the push of a button you can also create a grocery list. Paprika assumes you don’t have any of the ingredients but shows you the list before saving so you can check off the ingredients you already have. One of the preferences sets the grocery list to sort by aisle, which is really nice. Maybe it’s not exactly how your grocery store is set up but dairy is always together, meat is together, breads and cereals tend to be together so it’s probably a good place to start.

If you’re crazy organized (like two engineers) you can take inventory of your pantry and enter it into Paprika, and then when you create a grocery list it will automatically uncheck those items already available in your pantry. Yeah, even Steve and I aren’t that diligent! 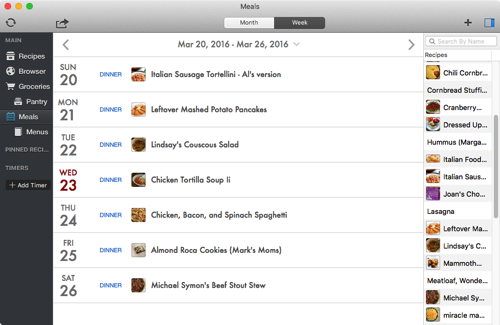 If you want to plan out a meal with several dishes, you can create Menus containing multiple recipes using the same drag and drop method we talked about in weekly or monthly meal planning. I think the Menus thing would be handy if you were planning a really complex menu like for Thanksgiving where you’ve got 12 different dishes being managed, but it’s not something I use day to day.

Paprika is $20 on the Mac App Store, and it’s another $4.99 each to buy it for your iPad and iPhone. I wish it were one price for the two iOS apps but they are very different and so they charge for them separately. You can run the iPhone version on the iPad if you want to, but it’s that old school thing where you see everything at 2X on the iPad. The iPad is great in the kitchen (no danger of spilling flour or vinegar into the keyboard), but the iPhone is what you’ll have with you at the grocery store.  If you create a grocery list from the Mac or the iPad, you can export your grocery list to the Reminders App and it creates a formatted checklist that is all you need for the grocery list. I made soup the other night just using the iPhone app and it actually worked great. Tough decisions but If I had to choose 2 of the 3 to buy, I’d go with Mac and iPad or even only the iPad version if money was tight.

Oddly one of my favorite things about Paprika is the simple feature that it keeps your device from falling asleep! I can’t count how many times I’ve been making a recipe only to look over at the iPad and see that it’s gone dark. I have to stop what I’m doing, wash AND dry my hands so that I can wake the iPad up and authenticate, just to verify whether it was a teaspoon or a tablespoon of cumin I was supposed to add!

Speaking of using your fingers, you can tap on ingredients to check them off as you add them to the recipe. If you’re anything like me, you often look at a recipe, down at the pot, back to the recipe and think, “Did I put the salt in yet?” Paprika draws a line through the ingredients when you tap on them so you’ll never have this question again. Of course you’ll have goop on your screen from that! You can also tap on steps and they stay highlighted so it’s easy to glance back at the screen to see what you’re supposed to be doing.

Probably one of the coolest features of Paprika (which Lindsay noticed, not me) is that if there’s a time in the written text of the recipe, like “simmer for 12 minutes”, you can tap on the time and a timer pops up set to 12 minutes! Awesome feature. You can also manually set a timer in the app as well. I use my Apple Watch for timers normally but I think tapping the time in the recipe is a lot easier.

Paprika lets you bring in photos of your masterpieces to your recipes. I’m not sure why this is so very pleasing, but if I see a recipe without a photo I’m sad and don’t want to make it. If it’s the original photo from whoever created the recipe that’s nice, but having my own photo makes it more personal for me.

I’ve mentioned that Paprika is cross platform, and that’s only useful if you can sync across devices. Instead of using something like iCloud or Dropbox, the makers of Paprika do their own syncing service. It does mean sharing your recipes with a third party but it seems like this isn’t sensitive data so I’m ok with that. In my experience it’s rock solid so that’s what really matters to me.

Recipes are probably the most sharable thing on the planet (except when they’re your grandmother’s secret cookie recipe). Paprika supports sharing to Twitter and Facebook but they’re kind of silly. It simply writes a post that says “Made with Paprika” and includes the photo. I’m not sure what I expected, maybe a link to the recipe on their server? 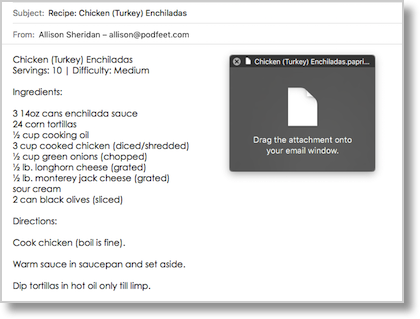 The more useful sharing options are to export out the .paprikarecipe format, which is how Lindsay and I share recipes. If you’re sharing with a non-Paprika user, the share to email option is fantastic. It plops a beautifully formatted version of the recipe into an email with everything but the image. They also do something I’ve never seen before. A little grey window pops up that says “Drag the attachment onto your email window”. It turns out the attachment is actually in the grey window and it’s the .paprikarecipe formatted file. Kind of cool that they give you both options in one email.

Paprika is a really fun and beautiful application that has inspired me to find and make more interesting recipes. Of course having Lindsay feeding them to me is the biggest part of my inspiration but being able to share recipes with her and have them so easy to follow on the iPad really makes me want to venture out into more adventurous cooking.

You can find links to the Mac, iPad and iPhone versions of Paprika in the shownotes. Remember it’s available for more platforms at paprikaapp.com.