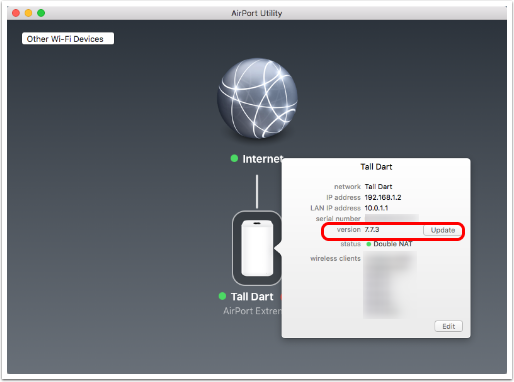 I’m really lucky to know Steve’s dad, Ken. You may remember him from his video appearance entitled “Octogenarian Talks 1Password”. He’s not super technical but he is VERY motivated towards security. He works really hard to understand the risks of online computing and to do whatever he can to mitigate these risks. He’s actually a great example to us all.

A while ago, Ken wrote me a message telling me that his AirPort Extreme had a blinking amber light on it instead of a solid green light. I looked at mine, and it was blinking amber as well. I unplugged it, waited 10 seconds and plugged it back in, and the light turned green. I wondered what it was but suggested my father-in-law do the same thing. He did and he got the green light as well.

About a week later, Bart told us about an important firmware update to the Apple AirPort line of routers. I told him about the amber blinking light we’d seen and we concluded that the unplug/plug back in trick had caused the firmware to be updated. I’m not sure about Bart but I thought that was pretty slick.

But then this week Ken wrote to say that again he had the blinking amber light and sure enough mine was blinking as well. Perhaps Apple had issued another update but that seemed really soon for it to happen again.

The first time this happened I had opened up the AirPort Utility to see if I could see an alert about the router, but I have such a weird setup with my routers now that I wasn’t able to actually see the router with the AirPort Utility, even when I switched my Mac from the Netgear I normally use to the AirPort that handles only the Internet of Things in my house. I could see a nice green dot next to the Internet icon but no physical AirPort. A note at the bottom said “No configured AirPort base stations have been found.” 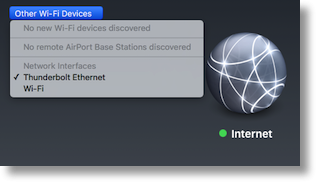 This time through, I figured I’d better think a little harder on why the AirPort wasn’t showing up. I hunted around through the menus and then noticed a button entitled “Other Wi-Fi Devices”. I pushed that button and it showed that I could select my Thunderbolt Ethernet connection or Wi-Fi, and it had defaulted to Ethernet. I toggled it to Wi-Fi and suddenly my Airport Extreme was showing up in the AirPort Utility.

This is when things got interesting – there was a nice big red 1 next to my router’s name, and if I clicked on it, I was shown the usual information about the router like my IP address, but also the firmware version. It said 7.7.3 and right next to it was a button to Update. Well that would have been useful a few months ago, eh?

I went online to see what the latest firmware update was, and it turns out Apple released 7.7.7 for the Airport Extreme back in May! So yeah, if you heard me say that all you have to do is unplug and plug back in your Airport to get the firmware update, erase that from your brain right now!

I opened my trusty Clarify before I ran the update, took screenshots and annotated them as I ran through the quick few steps. My father-in-law loves my tutorials. He prints them out and puts them in a notebook for safe keeping so it’s fun to make them for him. I figure if this would help him, maybe it will help others, so of course I posted the tutorial How to Upgrade Apple Airport Firmware up on podfeet.com. For most NosillaCastaways it’s a pretty simple process but I figure you guys might want to point your friends and relatives at this so you don’t have to walk them through it.