This week’s Dumb Question comes from Dorothy, AKA maclurker in the live chat room. You haven’t heard from her in forever because she’s been traveling in Alaska and Canada on her boat for the last few months. With total disregard for how lonely I am at the gym this summer, she seems to be having a splendid time watching bears and such.

She rarely has enough Internet to check in, but this week she sent in a question: 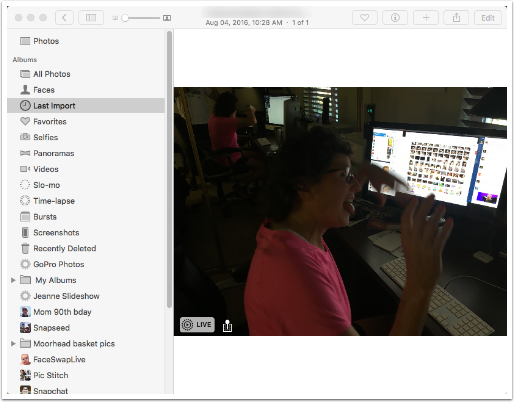 “Yesterday we went to the Anan Bear Observatory and got to see bears catching salmon in a waterfall and bear cubs and even some bear drama. Some of the action was pretty fast. Marc was using his iPhone SE to take pictures. The iPhone is new enough to do that creepy-wiggly thing where it takes 5 or 6 snaps in a row for every picture you take.

(I think she means Live Photos)

If you say save this photo to the Photos app, it just copies Image 0, without giving you any choice. But what if Image 1 or Image -2 is better and that’s the one you want to use. How do you get to it?”

It took some googling and some experimentation to find a workflow that worked but I cracked the code on this. It turns out that the Marketing-speak of “Live Photos” is a bit of trickery. It’s not actually a series of photos. It’s a single high resolution JPG photo accompanied by a lower resolution MOV video file. If she had asked how she could extract a high resolution image, I would have told her it was impossible, because it simply doesn’t exist.

But maybe a lower-resolution image would be just fine, since we only post our images online these days, unless you’re Mark Pouley of course. I created a Clarify tutorial (of course I did) complete with screenshots and arrows to draw your attention to the important bits and bobs. There’s a link in the shownotes to the tutorial of course.

I can walk you through how it works though. First you import the Live Photo into the Apple Photos App. Then Export using the “Export Unmodified Original” option. This will show you the separated JPG and MOV files.

Next you open the video file in QuickTime, and scrub till you get to the frame you’d like to extract. At that point you simply select File –> Copy and then open Preview and choose New from Clipboard. Boom, you’ve got your image. This took longer to describe than it would to execute.

In my experiment I used an iPhone 6S, and while the key frame image was 4032×3024, the image extracted from the video was 1440×1080. While that’s much lower resolution, it would be a perfectly acceptable 4×6 print, if you remember what prints are!

It’s not exactly an elegant answer but it does teach us about what Live Photos really are so it was fun working out the solution for Dorothy. Even if she’s neglecting me right now.