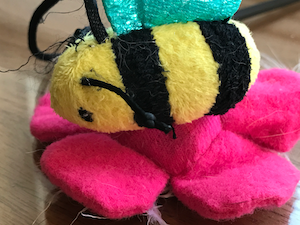 There’s a lot of reasons we use to justify how much money we spend on our technology. One of my personal favorites is how we justify new phones. “My contract is up”, “It’s been 2 years” and “It’s my turn” are amongst the more popular versions of this silliness.

Well, it’s my turn to get a new phone this year. Steve is on the s track and I’m on the non-s track for the iPhone. We pay full price for our iPhones now so there’s no logic whatsoever to this, but at least it keeps us from each buying a new phone we don’t need every year. I mentioned earlier that I decided it was time to upgrade to the big girl iPhone, so I opted for the iPhone 7 Plus. My decision was made easier by the new dual cameras.

A little photography background on the term aperture

I took the last week to spend some time testing the wide-angle camera in the 7 Plus against the equivalent camera in the iPhone 6, especially in low light situations. The iPhone 6 and 6 Plus (and iPhones before those) have a lens with an aperture of f/2.2, while the iPhone 7 and 7 Plus have an aperture of f/1.8. Before we get into the comparisons, we should talk about what that means. First of all, the aperture is the hole through which light travels to get to the sensor on your camera (or the film in the old days).

[More info on aperture in this Wikipedia article: https://en.wikipedia.org/wiki/Aperture]

The brainiacs who decided how to assign values to the size of the aperture decided to make it a fraction, so that while people say, “f two point two” it’s really f followed by a slash and then the number 2.2. This is important because as a fraction, the bigger the f-number, the smaller the aperture. So the iPhones 6 at f/2.2 have a smaller aperture than the iPhones 7 at f/1.8.

The size of the aperture on a camera has two major effects on photography. First, the larger the aperture, the shallower the depth of field. If you want everything in focus from the person in front of you to the mountain way behind them, you need a very small aperture. If you want to have a flower in sharp focus with a blurry background, you need a larger aperture.

I can explain this using the analogy of how our eyes work. When people first need distance glasses, you’ll hear them say, “I only need them at night”. The reason this is true is because at night your pupil (the aperture of your eye) gets larger and that causes a shallower depth of field so it’s harder to focus at night.

But why does your pupil get larger in the dark? To let in more light. And that’s the second effect that the aperture on a camera has on your photos. The larger the aperture, the more light you can get on the sensor. More light doesn’t necessarily make your pictures brighter. Today’s cameras, especially those in our phones, have highly sophisticated processors that will do things to compensate for low light. Specifically they will increase the ISO, but that has a price to be paid. The higher the ISO, the more noise that will be introduced into the darker areas of your photos.

So if you have a smaller f-number like on the iPhones 7, that’s a bigger aperture, which means more light gets into the sensor, which means the processor doesn’t need to up the ISO which means your low light photos will look less grainy and noisy. See how this all works together?

But wait, that’s not all. There’s another effect on the noise in a photo and that’s the size of the pixels on the sensor. The smaller the pixels, the more noise you’ll get (if everything else in the camera is the same of course). The iPhone 6 camera is 8MP, but the iPhones 7 are 12MP. That’s 50% more pixels on the 7 Plus’s primary camera. Now if they crammed 50% more pixels into the same sized sensor, that would introduce more noise. But they didn’t just put in more pixels, they also increased the size of the sensor.

The sensor on the 6 is .24 inches, while the 7’s sensor is .33 inches. The 7’s sensor is 1.375 times as bigger in the diagonal, so if we square that, the sensor is actually 1.89 times as big in area, or 89% larger. So Apple has not only increased the number of pixels by 50% in the iPhone 7, since the sensor is 89% bigger, that means the pixels are actually larger as well. Mathematically we should see a big improvement in lack of noise from low light photos from the 7 Plus due to the larger aperture and the bigger pixels.

My process was to take a photo with both cameras one after the other (I tried doing it at the same time but I’m just not that coordinated). I did not rig up a pair of tripods and I didn’t use alignment tools, I aligned the photos by eye, and was careful to try and get the same field of view because that could cause exposure differences. I turned off Live Photos on the iPhone 7 Plus, and I turned off HDR on both cameras.

I am going to talk through six pairs of photos. Two are in good daylight, the other four are in progressively challenging light conditions. I put a link in the shownotes to the full-sized, completely unmodified original images as a zip file so you can view them and really zoom into the detail:

We’ll start with an outdoor photo of a deep red rose in bright daylight. This photo shows the least of the differences of all the shots I took. However, the 7+ shows better contrast in shadows and edges on the rose, giving it a feeling of more depth. The grass is a richer green which may or may not accurately represent the color of the grass. Red is the channel most difficult to photograph which is actually why I chose this subject. It’s very common to lose all depth and get a flattened, blown out look. I opened the images from the two cameras in Affinity Photo and in the Develop Menu turned on the “show clipped tones” option. This highlights in bright yellow any areas where the color is blown out.

I took screenshots of the two images showing the clipped tones for the shownotes so you could see the differences. While both cameras had trouble with the red of the rose, and had significant areas blown out, the 7 Plus had much less problematic area. 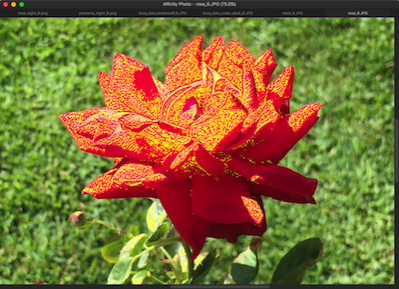 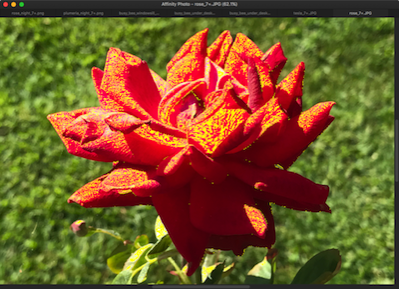 iPhone 7+
Next I took a cat toy we’ll call Busy Bee (extra credit if you get the movie reference, and no Steve, you don’t get to play). Busy Bee makes a good subject because it’s a yellow and black fur bee, with bright pink fur flower petals below, and brilliant turquoise shiny wings up above.

I put Busy Bee on a windowsill in broad daylight. Both cameras did a great job and only in looking very closely will you notice that there is more detail in the black stripes with the iPhone 7 Plus. If I wasn’t searching for differences I don’t think I would have noticed. 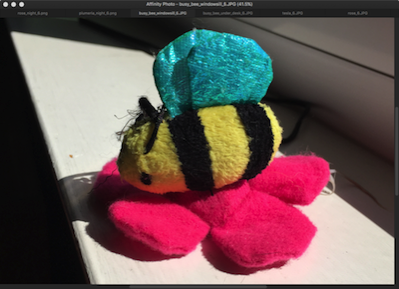 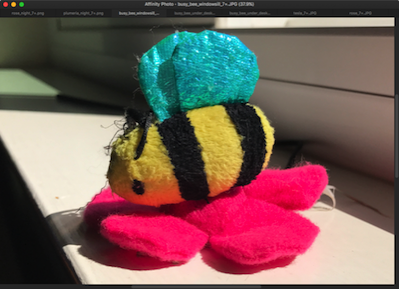 Now let’s take Busy Bee for a trip under my desk. It’s pretty dark under there, and I closed the shutters in my room to darken it even more. I put Busy Bee up against my black UPS for contrast. I have to say that both cameras did an admirable job under these challenging conditions. But the 7+ really shines here in comparison. It looks almost like daylight. The colors are rich, the image is clear, and the level of noise in the black of the UPS is dramatically better than on the 6 photo. You don’t see the detail in the black stripes like we did on the windowsill in daylight but other than that it looks surprisingly good. 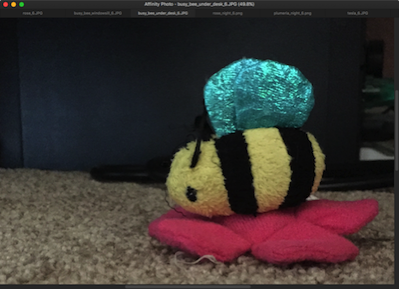 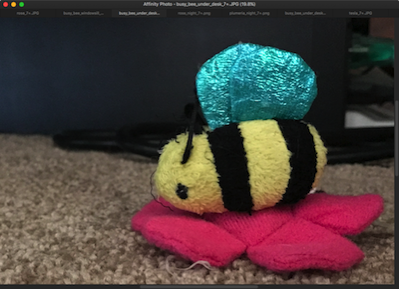 iPhone 7+
I knew that a photo shoot without including Tesla would give me some hate mail so I took a photo of her lying on her dog bed in my bedroom. It was daytime but I’ve closed the shutters with the exception of one about 4 meters to the left of her. Not dark but definitely not ideal conditions. While both cameras did well, the 7 Plus is a little more contrasty in the stripes in the bed, her muzzle looks a little sharper, and the scrollwork in the background is more detailed. It’s not a tack sharp photo by any means but it’s more pleasing from the 7 Plus. This was probably the closest neck and neck comparison with very little to complain about on the 6 photo. 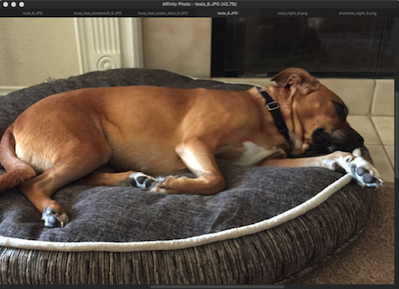 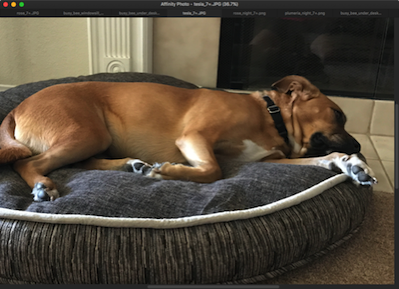 Ok, enough with these softballs. Let’s really put the cameras to the test. Remember the outdoor rose? I decided to capture that at night, lit only by an incandescent security light that’s maybe 5 meters away. I’m conflicted on which camera to declare the winner in this case. The iPhone 7 Plus image is much pinker than the rose looked to me, while the color representation on the iPhone 6 is more accurate. Accurate here must be defined by what I saw, right? Color is only reflected light so it’s not an absolute. On the other hand, the shadows behind the rose are not as detailed on the iPhone 6, with much more detail on the image from the 7 Plus. Overall the color bugs me enough thought that I’ll have to give this one to the 6. 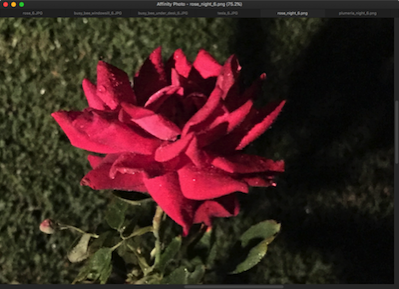 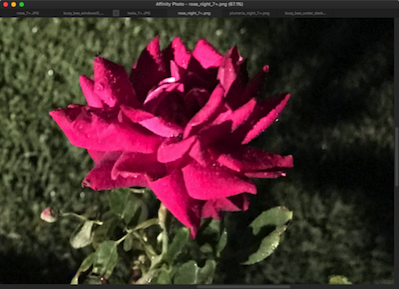 iPhone 7+
The final test was also a night time test. Our front driveway is lit only by a pair of low-wattage carriage lights on the front of the garage that are pretty much only decorative. To the side of the driveway is a flower bed where we have a plumeria plant, which has those marvelous little colored flowers that Hawaiians make leis out of and smell so extraordinary. I should point out that neither camera could smell the flowers.

This night time plumeria test was absolutely no contest. In the iPhone 6 photo you can see the flowers, but they’re dark grey and the leaves of the plant are just dim shadows. Almost no detail in the dirt is at all visible. In the iPhone 7 Plus image, the colors are bright and true, the leaves are well lit and you can even distinguish small rocks and clumps in the dirt. I don’t want to imply that it’s a GOOD photo, but the iPhone 7 Plus image is significantly better by a wide margin than the iPhone 6 image. 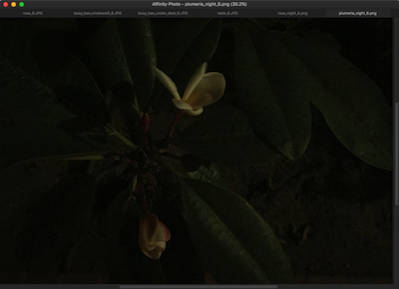 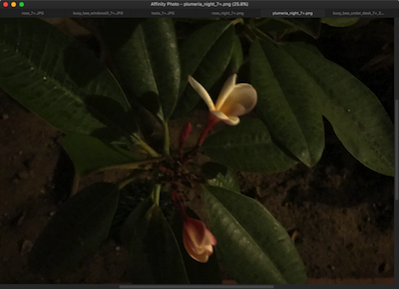 I want to give a shoutout to Bart Busschots, Steven Goetz and Mark Pouley who looked at these images with me and helped point out flaws in the photos and discussed at length whether any of it mattered.

I think the takeaway from this study is that if you’ve got the need for a lot of indoor photography in less than ideal lighting you probably will notice the difference with the iPhone 7 Plus. If you’re a pixel peeper, you’ll definitely notice the difference. But if you’ve got the iPhone 6s or even the 6 and don’t have the funds or desire to buy a new phone right now, I don’t think you have to be super jealous of the wide-angle camera on the iPhone 7 Plus. You’ve got a great camera so go take some pictures! I’ve got a Busy Bee you can borrow.

3 thoughts on “How Much Better is the iPhone 7 Plus Wide-Angle Camera Than the iPhone 6?”