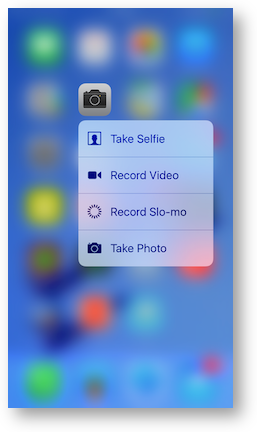 If you’ve got an iPhone 6s or above, you have access to a technology called 3D Touch, not to be confused with Force Touch on the newer MacBook trackpads. I think 3D Touch is one of those things Apple puts into devices that requires some effort to see if it has any value to you. When it was first introduced, apps had to be rewritten to give you information with 3D Touch. This means that if you tried it early on, you likely gave up on it as a silly gimmick. My goal in this article is to reveal how useful it actually is now. Hopefully this will convince you to give it another try and if you don’t have a 6s or above, maybe you’ll have some renewed excitement about the newer models. We’ll see if I succeed.

First of all, let’s try to define 3D Touch. You know how you press and hold to get the icons to jiggle so that you can move them around or delete them? Well once you have 3D Touch it’s really hard to get into that mode. When you press and hold lightly, the icon highlights and all the others get blurry but the little x doesn’t come up and none of them jiggle. Press harder and you’ll activate 3D Touch. You know you’re in 3D Touch because you’ll get some haptic feedback along with a pop up over a nice light grey background. Maybe I’m just unskilled and uncreative on how to do it, but for the life of me I can’t delete or move apps any more. Oh well, 3D Touch is the new hotness!

I have 158 apps on my iPhone 7+, and because I’m a giver, I took one for the team and tested 3D Touch on every single one of them. If an app doesn’t have 3D Touch support, you simply get the option to share the app to your pals. Luckily for you (and me), only 62 of my 158 apps had 3D Touch support. Let’s take a look at what 3D Touch can do.

I’ve only just described the first page of my apps and I realize this is going to be too long for one post. I think I’ll take a break now and come back to this maybe next week. There are so many unique ideas developers have come up with for 3D Touch. I think it’s interesting to see what they’ve come up with and how maybe 3D Touch is more useful than you thought it would be.