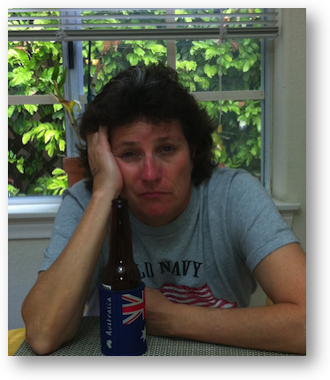 Before I go on this particular rant, I want to make sure to state that I have been incredibly blessed in my life in every way and that I realize this is a petty and small problem I feel compelled to describe to you.

When it comes to ordering Apple gear, I fell like the cartoon character Ziggy. Remember him? He’s the guy for whom everything seems to go wrong.

If you’ve been listening for a long time, you’ll remember when the iPhone 4 first came out. Rather than have it delivered to my house, I pre-ordered and got up at the crack of dawn and stood in line outside the Apple Store at 6:30 am. But while everyone who chose home delivery happily got theirs throughout the day, it took TEN HOURS for me to get my phone.

When the iPhone 5 came out, I was smart. I chose home delivery. Even though my buddy Ron who lives exactly 1.5 miles away in the same darn town got his early in the morning, mine was the very last one off the truck at 6pm.

Then there was the time I ordered the iPad Air. I was going to wait at home anyway, so my friend Diane had me order her one too to be delivered to my house. I figured I’d be last on the route yet again, but imagine my consternation when at 5pm, FedEx CANCELLED my delivery! I had some choice words with dispatch about it, but they said I’d have to wait till the next day. I called the Apple Store, and they had TONS of them in stock. Seriously. If I’d tried to buy day of they wouldn’t have them, right? Anyway I was so angry I drove over to the Apple Store and bought two of them, figuring I could return the other ones the next day.

As I drove down my street to return home, a FedEx truck was pulling away from my house. I pulled over to block the driver from getting away, jumped out of the car and asked him if he’d just tried to deliver something. Sure enough, he had our two iPads.

Ok, let’s fast forward to the new MacBook Pros. I jumped online the instant they went on sale, and ordered the 15″ model. Delivery was going to be tricky though. We were going to be in San Diego for the week watching our grandson, returning on the afternoon of Thursday the 17th of November. When I ordered the MacBook Pro, it said delivery would be on the 17th. That was cutting it close, so I looked at the option to deliver to my local Apple Store. But when I changed it to that option, the delivery moved out an entire week! Clearly unacceptable. I figured I’d take my chances and have it delivered on the 17th, We already know I’m last on the route so that should work, or worst case they’d bring it to me the next day. I figured I could survive that.

But remember I told you I feel like Ziggy sometimes? Guess what Apple did? They shipped it THREE DAYS EARLY! I couldn’t believe it. For once I was getting mine first, but I wouldn’t be there! The good news is I found out it was coming early so I was able to redirect delivery to my local UPS customer center, and they nicely held it for me till I got back into town. And guess what time they delivered it there? At 7am. So you know what’s going to happen next time I order from Apple, right? I’ll choose to have it delivered directly to the UPS center hoping to get it early again and not have to wait around all day, but some calamity will occur, maybe a fire, or some police activity will block off all the streets around it. I’m just certain it will all go horribly wrong.

Migration to the new Mac

Well anyway I finally got my new baby when I got back home. Remember just recently Apple replaced a ton of stuff inside my 2013 MacBook Pro, so I’d been forced to do a clean install? Because of that I figured I could finally enjoy the process of using Migration Assistant. But that was a disaster.

I plugged my old and my new MacBooks Pro into my gigabit Ethernet switch (using one of my fancy new dongles) and launched Migration Assistant. Once I got both Macs talking to each other, I watched the timer go longer and longer and longer. It started at 5 hours, then went to 9, then 15, then 25 hours. The thing that really concerned me was not the timer, but it showed me the data transfer rate. It started around 12MB/sec but then slowed to 6MB/sec. This is transferring between two SSDs, so that shouldn’t have been the bottleneck. Gigabit is 1000mbps and at 8bits per byte, that’s 125MB/sec. Why was it running at 5% of that speed?

I hoped it was the old watch pot never boiling problem so I left it alone for over four hours, but it had only moved 120GB of data. At full speed, it should have been able to move all 600GB of my data in about 80 min. Clearly something was wrong. I thought maybe since WiFi was on on both Macs, maybe it wasn’t using Ethernet after all. I did have the two machines sitting inches away from my fancy Nighthawk X8 router, so even WiFii should have been faster than that.

I finally bailed on the migration, turned off WiFi on both Macs and tried again. Guess what Migration Assistant did? It turned WiFi back on!

Ok, FINE. I simply DRAGGED my data from one Mac to the other and it took less than two hours. then I let Migration Assistant migrate my apps. But guess what? Every single app is asking me to either authenticate to the App Store when I launch it, or enter my license keys. I’m having to configure IRC, and Auphonic and more. All. Over. Again. While this was fun and entertaining the last time, I really did not want to do this again!