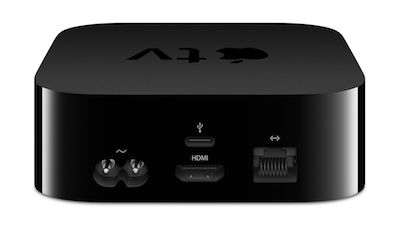 Listener Jill sent in a great dumb question this week, and Allison decided that I was more qualified to answer. Here’s Jill’s question:

What is a “receiver”?

The reason for my question is, Apple told us at WWDC that the 4th gen Apple TV could be used as a destination for Airplay 2 (multi-room audio). But the 4th gen Apple TV has no audio out, so how can that work? I don’t want my TV screen lighting up every time I want to play a podcast! Well, I asked around, and I got told “You need a receiver that offers HDMI connections”. Hence my question. So … what is a “receiver”? Also, supplementary question – why is it called a “receiver”? I have a good old fashioned amp, because I’m nearly as old as you are. I get amps: sound sources go in; you choose one, adjust the volume, job done. You can’t buy them any more – just these receiver things, and since I never got on that train, I haven’t a clue where to start asking about them.

Good question, Jill. You actually pose a couple questions. The first is “What is a receiver and why is it called a receiver?” and the second (implied) question is “How do you play audio from a gen 4 Apple TV?”

Let’s start with what is a receiver and why is it called a receiver. There are several types of receivers but the relevant ones for this discussion are an audio receiver and an A/V (audio/video) receiver. 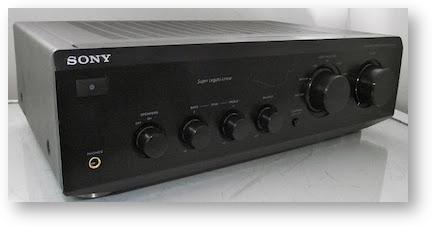 As technology has moved forward, the world has moved from analog to digital. For consumer electronics, the predominant format to transmit digital audio and video information between components is HDMI. This moves us into the realm of an A/V receiver, sometimes called an A/V home theater receiver. An A/V receiver performs the same functions as an audio receiver but it also accepts and switches video signals as well as audio signals. Usually A/V receivers can accept both analog and digital source inputs for both audio and video, but the cleanest and highest resolution digital audio/video is achieved by using an HDMI input. In this case, the A/V receiver takes the HDMI signal (which contains both digital audio and video) from your TV, DVD, BlueRay, or DVR, allows you to select the desired source, and routes the audio signal to your speakers and the video signal to your display. An A/V receiver can also accept audio-only (w/o video) signals through analog, optical, or HDMI connections and route the audio to your speakers without displaying any video or lighting up your TV screen.

With that background, we can move to your implied question which is how to play audio from a gen 4 Apple TV. As you well know, Apple is very forward thinking so they never included analog audio output on the Apple TV that would allow you to plug your Apple TV into your “old fashioned amp”. At one time I think they had optical audio output but that is gone on the 4th gen Apple TV. The only way I know to get audio out of a gen 4 Apple TV is to use the HDMI output. To use this output you would need a receiver that accepts HDMI as an input. I know you’re only interested in getting audio from your Apple TV to your speakers but I don’t think there are receivers that take HDMI inputs but only handle audio. Once you take the step to a receiver that handles HDMI as an input, I think you’re limited to A/V receivers which also handle video. But you would have the option to not even turn on your TV screen and just let the audio from your Apple TV play through the A/V receiver into your speakers. 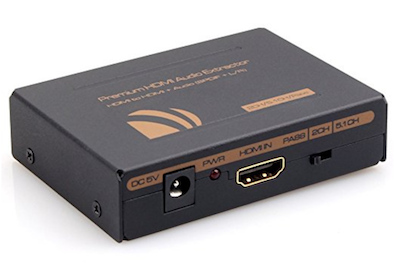 (Jill later mentioned that she might go with an HDMI audio extractor device, which is a low cost option for converting digital audio on the HDMI signal to analog audio for input to an audio amplifier.)

Allison and I moved to an A/V receiver several years ago since we were getting so many HDMI devices. I have to say our A/V receiver is a very convenient way to switch between our various audio/video sources.

One more thing is worth mentioning but it may not solve your problem.  Most newer TVs have HDMI inputs so if you have one of these newer TVs, you could take the HDMI output from a gen 4 Apple TV and route it directly to the TV.  But this would not send Apple TV audio to speakers external to your TV (if you have external speakers) and it may not be possible to listen to audio only on the TV without lighting up its screen.