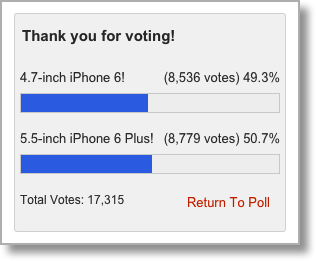 I’m sure by now each of you either has a new iPhone or are waiting for a new iPhone or are never getting the new iPhone and in any case are tired of the conversation around which one to buy, so I’m not going to add to it! iMore did a poll of their readers asking which phone people were intending to buy and after 17,315 votes…the answer was split almost EXACTLY 50/50. I thought that was simply fascinating! That means no one can tell you which you’re going to like so we don’t need to keep endlessly droning on about which one is better!

With that aside, I thought it might be fun to chat a bit about a few unusual things I’ve found with my iPhone 6 and iOS 8.

I also love how Apple comes out with the new OS a few days before the new phones. I like it because everyone gets something new and shiny to play with that way. As much as the new hardware amazes and delights, I think half of my enjoyment might be because of iOS 8 itself. It’s not all happiness and joy for me though.

Enough joy for now though, some things are feeling pretty buggy to me in iOS 8 – even beta-ish, so if you’re on the fence on whether it’s time to upgrade, listen up.

Well that’s going to end my diatribe and discovery for now – in any case I’m having a blast with both the new iPhone 6 and especially iOS 8!