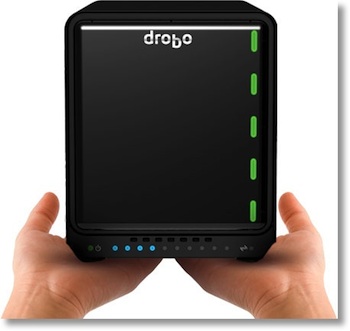 You’ve heard me complain about the Drobo for a long time, and it’s really not the fault of the Drobo. Steve and I bought a Drobo FS many years ago but I didn’t think we really needed it, I felt we succumbed to the convincing advertising of our podcasting friends. I didn’t think we had a problem for it to solve. After a few years though, Steve and I have both started to use it. I offload things that don’t need to be local, like my old uncompressed audio files of the show (which I probably never will need but you never know), and disk images of OS installers. I also have started scanning in bills and such and I don’t want those on my laptop so the Drobo is a nice spot for it. Steve does a lot of video using Final Cut Pro X and he was never able to save his project files because they’re HUGE. He started saving them when he realized he had gobs of space on the Drobo.

So over time, a soft spot in my heart has grown for the Drobo. Over the past couple of years, we’ve had 3 hard drive failures, and it’s rather pleasing to get an email notification and to see the red light on one drive, and then simply pull it out and replace with a new drive and await the notification from Drobo that now all is well. I’d rather not have drives fail but it wasn’t a catastrophic situation.

The Drobo FS that we bought is, however, notoriously slow. It takes forever to mount a share (which looks like a folder to the user) and the Drobo Dashboard app is also slow to connect. I had never measured the speed of moving files to it but once Dave Hamilton told me it was slow, then it started to really bother me.

Fast forward to now, and Dave and Mac OS Ken are advertising the Drobo 5N, their new network attached 5-bay unit, and Dave says it’s fast so Steve and I started to get the itch to upgrade. But we really had no excuse to do this, no problem to solve as some might say. Steve adroitly pointed out that since the files we store on the Drobo do not exist anywhere else, it’s not technically a backup. I didn’t realize by the way that in addition to his uncompressed video projects, he’s now storing all of his finished videos only on the Drobo. Now these files are protected from the most likely disaster, that of a hard drive failure so in that sense they’re a backup but if the controller for the Drobo went out, we could potentially lose all of the data. This happened to a friend of ours and he ended up sending it all back to Drobo and they were able to reconstruct the data but we’d sure rather not go through all that. Now we had rationalized our decision!

Steve ordered the 5N and when it came time to choose drives, we looked at an article at backblaze.com, one of the online backup companies, where they outlined their experiences with drive failure rates. Remember I mentioned we’d had 3 drive failures? I’m pretty sure 2 of the 3 were Seagates, with the 3rd being Western Digital. I had always assumed it was like most things, you can have a bad experience but it’s just random.  But in fact according to Backblaze, the failure rates on drives from Seagate are 3-4 times more prevalent than Western Digital drives. Even more impressive are the Hitachi failure rates. Where Seagate is as high as 14% annual failures, Western Digital at 3%, Hitachi comes in at around 1.5 – 2%. I put a link in the shownotes to the article so you can read their analysis for yourself, but this data pushed us to buy Hitachi drives from a 3rd party to populate the new Drobo.

One more decision point – with the Drobo 5N you can choose to also buy an mSATA SSD to implement “Hot Data Caching”. Evidently it would speed up data access, and since that was one of our main complaints, we threw in an SSD. By the way, this mSATA SSD goes in the “Drobo Accelerator Bay” which is a small slot in the bottom of the unit, leaving 5 bays open for normal disks.

When the new Drobo arrived (Merry Christmas, Steve) I suggested he run some speed tests. We know the Drobo FS is slow, so it would be fun to compare (and to continue rationalizing the purchase). We’d read on line that while you can move your drives from the FS to the 5N, you’ll only get partial speed improvement, the real speed comes when you put all new drives in the 5N. I thought it would be cool to measure that difference too. So the plan was to test read/writes to the old FS with its drives, then the new 5N with the old drives, then copy the data to the 5N with the new drives and run the speed test a 3rd time. That would be cool data, right?

Steve popped open the 5N and put the drives from the FS into it, and started to run speed tests. But he noticed the 5N was doing a fair bit of chunking away on the drives. He had a sudden horrid thought: What if the 5N was somehow optimizing those drives for its use (not overwriting them) and maybe they wouldn’t work in the FS when he was done? He called Drobo, and they confirmed, the old drives cannot just be slapped back into the FS! It’s not as bad as losing the data, but we just dropped close to a thousand dollars on this new unit, we really really need to put fresh drives in it, but how do we get the data across?

I should mention that we only have about 2.8TB of data on the Drobo right now, so I ran off to the store and bought an external 3TB backup drive. Figured worst case we could send this to a friend’s house and have off-site storage, right? Now realize what we have to do:

Now as much fun as that sounds, it gets even worse. Steve’s iMac is the logical one to do all this nonsense copying back and forth, but the poor dear (with 8 cores, a TB drive, and 3.4 GHz I7 in a 27″ iMac) does not have USB 3, so it’s slower than if we used my MacBook Pro, but I’m not willing to tether my laptop for the next week while we do all this! He’s also on wifi. We could hard wire him but I think our wifi network is faster than USB 2.0. I also remembered that the cable we used to connect the Drobo room years and years ago is CAT 5, so it’s only going 100BaseT. We dragged a CAT6 cable down the hall to the gigabit switch so at least that’s not the limiter here. Now he’s seeing peaks of 240mbps read/writes so I think we’re doing ok for now. Day 1 should get us 20% moved from the new Drobo to the backup drive. Sigh. You’ll probably hear more about this next week!