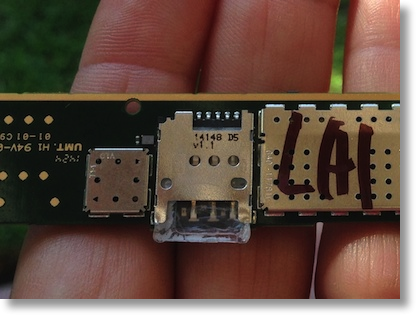 I’ve really been enjoying how much it’s made people nuts that I a) bought a Windows phone and b) that I actually kind of like it. Part of my reason for enjoying it has been the constant help by Joel Rushworth, who I met through Chris Ashley of the SMR Podcast. Joel isn’t pushy at all, he’s just there with the gentle suggestion, the helpful hint, the “hey have you tried this yet?”

A week or so ago he asked me if I’d moved my SIM card from my iPhone to my Nokia 635 so I could give it a real shakedown, using it as my primary device. I told him I hadn’t because the iPhone uses a nano SIM and the Nokia takes a micro SIM card. He told me that he was buying some of the adapter carrier thingys and he’d be glad to send me one when he got his. Good as his word, the adapter showed up a few days later. During one of the endless podcasts I was on last week (I shouldn’t complain, I loved every minute of it) I used a paperclip o pop out the nano SIM on my iPhone. The adapter/carrier thingy from Joel was a little piece of plastic the shape of a micro SIM, but with a pocket in it the shape and size of a nano SIM. Let’s call it a an adapter for brevity.

I laid my iPhone’s SIM in the adapter and popped the back off of the Nokia. I should mention that the Nokia doesn’t feel like it needs a case at all, the back feels kind of like a case and pops off without too much effort. Under the case is the batter which is easy to remove as well. Then there was a little metal piece that was obviously where the micro SIM was supposed to slide in. I slid in the adapter, put the battery back, popped the back on, booted it up, and Bob’s your uncle, the Nokia 635 was a full fledged phone on AT&T. Of course this was an idiotic thing to do while on a podcast, shortly after that someone called me and instead of being in Do Not Disturb mode like I always do with my iPhone, the Nokia rang away happily.

Anywho, proof of concept complete, I reversed the process with full intention of giving it another go when I had some time to dedicate to really thinking out using the Nokia full time. The only problem was that I had this tiny little plastic adapter and I was afraid I’d lose it. I had a brilliant plan. I opened up the Nokia and put the adapter into the little connector. I put the battery back in, and replace the back and I knew adapter would be safe. Or so I thought.

The next day, I was ready to do another experiment with the Nokia and the nano SIM from my iPhone. I went to pull it out, and it wouldn’t slide back out. I pulled gently, then firmly, then with a little bit more emphasis but it would only slide in and out a few millimeters. Steve is pretty good with electronics too, so I enlisted his help. He pushed and pulled a bit and then determined the problem. Remember I said I had to flip over the adapter so the nano SIM was on the underside of the adapter and that it fit into a little pocket? Well when you slide it in, there are three pins that push up against the nano (or micro) SIM to make the hard physical contact. With no SIM in there at all, the three pins pushed up into the pocket of the adapter, catching so that we couldn’t pull it out.

We’re nothing if not resourceful, all we needed was something stiff enough, thin enough, and narrow enough to slide under the adapter to push those pins back down so we could slide out the adapter. I think the kinds of shims you used in the old days to check the gap on the points on your carburetor would have been perfect. But I’m pretty sure we don’t have those any more. I had a very old metal ruler that would almost slide in, it was thin enough so we knew this would work but too wide so we could only go in at an angle.

We festered on this for a day or so and then decided (on Joel’s advice) to just take the phone apart. No problem, we’ve got a full set of Torx drivers. But our drivers went downy to T6 and this required a T4. Steve went out and bought me a really cool driver set that went down to T4, along with some other nice drivers, just to keep in my electronics kit. Either way I’m ahead so far, right? We took out every screw we could find, and just like ALWAYS happens on this kind of thing, we could get it to pull apart, but not along one edge. Argh! Our buddy Ron came over for dinner (who is also quite clever in this arena, and no matter how many gin and tonics we had, we could NOT figure out how to get this thing apart!

The next day I went onto iFixit looking for a tear down. I found a lot of Nokias but none had the exact problem I was looking for. Off to Twitter to ask for help and yet AGAIN Joel came to my rescue. He found a teardown for another Nokia, and it had the tiny little trick to fix it. When you look at the two pictures in the shownotes (after hearing the explanation) you’ll think we were all idiots (or had too much gin) but we never for a second would have found the problem. What looked like a solid case was actually a piece of very firmly applied black tape. Pull the tape up, and voilà! A nice little screw underneath. 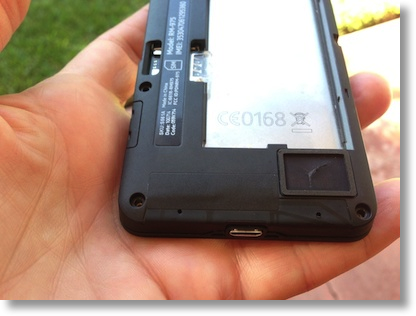 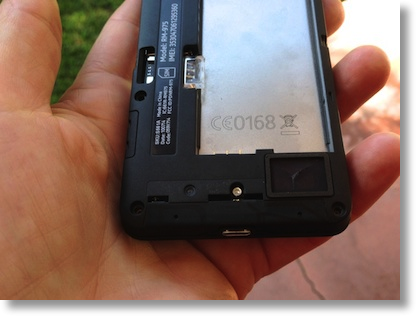 Yay – we got the phone apart! And had little more access to the SIM slot than when we started. I left the phone open for a few days on the kitchen counter, looking at it every time I walked by trying to think how to get the darn adapter out. Then one day Steve pulled his car out, giving me an unobstructed view of our pegboard of tools. I just stood there looking at clamps and electrical tape and saws and…JIGSAW BLADES! Yes, jigsaw blades are much narrower than my ruler but still thin. Of course I wouldn’t shove the saw into the SIM card slot, rather the end that goes into the saw.

I dashed over to the phone, and slid in the jigsaw blade. I had to jiggle it around a bit because it was actually too narrow now, so it was only depressing 2 of the 3 pins. I got it at the right angle to get all three pins, grabbed the adapter and pulled…and out it popped! My victory was not to last, because along with the SIM card adapter out also popped 1 of the 3 pins. What I didn’t think about was that the jig saw blade had holes in it, one of which grabbed hold of the pin as I pulled it out.

I guess the good news is that I reassembled the Nokia and other than not being a phone any more, it works perfectly. I have now given you instructions on exactly how to turn a Nokia 635 smartphone into a Nokia 635 Touch.