They say that behind every great woman is a great man, and that’s definitely the case with me and Steve. On Friday, also known as first Apple Watch delivery day, he stayed home for seven hours babysitting the doorbell not for delivery of his OWN watch, but for mine. Sadly he ordered the space grey sports version that within 3 minutes was back ordered a few extra weeks, but he still stayed home just for me.

I did have a good excuse. I went to the Downey School district to talk to the middle school kids about how fun it is to be an engineer. My friend Nancy asked three of us to go who all used to work together. I have to say that the kids were REALLY receptive to the STEM topics (Science, Technology, Engineering and Math). They’re all part of a program called Project Lead the Way that’s getting kids into the science fields. I kid you not, we saw 6th graders building and programming robots! 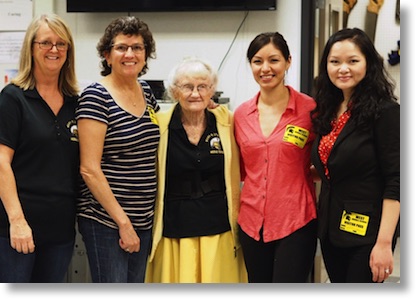 One of the reasons Downey’s schools are so successful is because they have a benefactor, a wonderful 97 year old woman named Dr. Mary Stauffer. She was a medical doctor in her career and later decided the best way to distribute her wealth would be to help fund programs in her local schools, including giant scholarships to kids who go to college from Downey. I threw a picture in the shownotes of Nancy, me, Dr. Stauffer, Lupe and Jean so you can see how awesome Dr. Stauffer is.

This was supposed to be about the Apple Watch and how awesome Steve is though, right? Sadly he didn’t even get the fun of answering the door for the package because of COURSE it came after I got back home from the school.

I’m sure that if you care, you’ve already seen unboxings and how cool the packaging is so I won’t talk about that. I would like to give you my VERY early impressions of the watch. Let’s start with the good stuff:

The only thing I have to complain about is a rather big deal. The watch interface is confusing in some ways. Pat Dengler came over on Saturday and we spent a lot of time comparing notes and trying to figure things out. The confusion comes in where you set things up. You can set some things inside the watch, some things inside the Apple Watch app on the iPhone and also inside the Settings on the iPhone itself. For example, if I turn off notifications for Twitter in settings on my iPhone, that turns them off on the watch. I can turn them ON for the phone and off for the watch using the Apple Watch app on the iPhone. I bet I’ve tangled you up right there, haven’t I? And I’m actually talking about one of the ones I understand! Like I said up front, this is only two days into using the watch so we’ll see but I’m a bit worried about how normal people will figure some of this stuff out!

I put a photo in the shownotes showing a notification that came from Twitter that shows how gorgeous this display is. I tweeted out one of the NAB interviews with a photo in it of me doing the interview, and Steve retweeted it and it came to my Apple Watch. The photo is clear and brilliant, the text is gorgeous and readable and really shows how this “watch” is amazing. Oh, and it tells time, too.

9 thoughts on “I AM Dick Tracy”