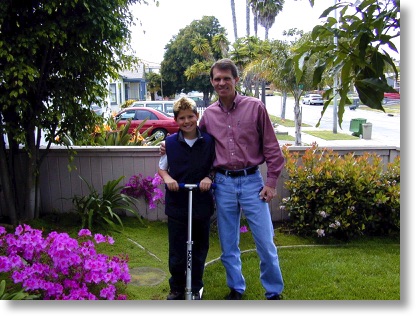 I haven’t talked much about the day to day experience of using Photos. I have to say it is positively awesome to have all of my photos on all of my devices. I bought a 1TB SSD in my MacBook Pro because I did not want to compromise on having all my photos, now I have them on my iPhone and iPad and I love it.

One unexpected consequence that both Steve and I have noticed is that we’re discovering favorite old photos. I ran across the very first digital photo I ever took. I had just bought the Nikon 950 and got a shot of Kyle and Steve out in our front yard. It’s a favorite old photo I’d completely forgotten about and was perfect to drop into Facebook on Throwback Thursday.

I have also noticed that I’m cleaning up my photo library because I’m viewing ALL the photos more often. I tend to skim by looking for a specific year but then get drawn in and start noticing that I saved extra copies of the same photo, or maybe 3 of the same thing where 2 could be tossed. Compared to most people I’m AMAZING at keeping my library cleaned up, but compared to the ideal we all think of I stink at it.

I was really worried at one point because I saw a bunch of photos as a white background with an exclamation point. I drilled down into them and as I feared, the real photos were missing. Now THIS would be catastrophic. I noted the names (you know, IMG_3278 kind of names) and opened up Aperture. In EVERY case the photos were in folders in Aperture called “Recovered Project”. In every case, the photo was also missing in Aperture. I never knew how those kept getting created and they’d also often have photos I KNOW I already had in my library. I’m still a tiny bit nervous but I don’t think I’m going to lose sleep over it because I think the Recovered Projects were mistakes anyway. Fingers crossed I’m right.

It’s been chatted about that Photos does have the option to open a photo over in Aperture, but lest you get your hopes up I want to tell you it’s a dumb implementation. It moves a JPEG over! Now who on earth would want to move a photo to Aperture for editing wouldn’t want it to to be a RAW photo? It did occur to me that you can export from Photos as a 16-bit TIFF to edit in Aperture or Photoshop Elements, which I believe is nearly as good as using the RAW photo, so remember that even if the tools are limited in Photos you’re not out of options.

I’m noticing a bit of buggy behavior with Photos. It’s not catastrophic luckily, but annoying. The main thing that I’m noticing is that I’m naming things and the names revert back. Remember I was worried about my albums coming over from Aperture? Photos put them in alphabetical order within the folder, and I wanted them in time sequence, so I put the date in front of each album as YYYY MM DD. Worked great…until the names went back to their original imported names. I thought maybe I was nuts because earlier I would have sworn I’d added titles to a bunch of photos and many of them showed no title. Not sure what’s going on there but I hope it settles down!.

There’s one thing that is going to annoy the daylights out of me until it gets fixed. And I sure hope this is a bug NOT a design choice. Let’s say I’m on a long trip. I take a bunch of photos of the Taj Mahal. That night I import all the photos and because I am just that organized, I delete the truly bad photos. I don’t empty my memory card because I want them on the cards as a backup while I’m traveling. Yes, I am also backing them up to an external drive as well but you can’t be too careful on a trip of a lifetime! So far so good. Next day I go out and ride an elephant and I add to that memory card. When I plug it back into Photos I have an option to only import the new photos. That’s great, and just the way Aperture would do it…but Photos considers the discarded photos new again! I still have them in “recently deleted” but Photos thinks I want them again. I don’t think that’s a logical way to present them. Photos does show me the photos on the card that I’ve already imported and I think the deleted ones should show there, but not under new. I’m going to have to pay way more attention when I’m importing now and paying attention is NOT my strong suit!