When Steve and I got off the plane from our great India vacation, it was just a wee bit of a culture shock to get back on the Internet. Normally we enjoy the flood of information that comes from Twitter, Google Plus, Podcasts and even Facebook, but almost an entire month out of the loop left us feeling a bit unsettled. We started reading a bit here and there, and we saw an app called Meerkat that was taking the Internet by storm, but then realized we’d actually MISSED Meerkat and it had been overtaken by Periscope.

I bring this up because Periscope is pretty interesting and I’ll be talking about it a bit more in the show so I figured I’d better explain it. Periscope is an iOS-only app that allows you to live video broadcast AND send a notification to your followers on Twitter, AND allow the broadcast to be viewed for the next 24 hours, AND to save the video to your phone. There’s a lot of discussion of whether this is a big deal, a flash in the pan, or something we had a long time ago and somehow never took off.

For some reason this tool has taken off like wildfire. I did a Periscope of walking Tesla, and a ton of people showed up. Seriously. And many of them were people I knew, like Victor Cajiao, Maryanne Garry (remember the memory psychologist?) and Neil, the guy who saved the podcast almost 10 years ago. Obviously all these people weren’t actually interested in watching me walk Tesla, but rather are interested to see what kinds of things people will be broadcasting. 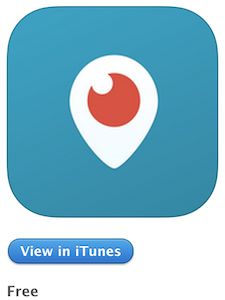 Let me back up and explain how this works. Download Periscope to your iOS device, and sign in with your Twitter credentials. I mentioned Meerkat’s infant mortality at the beginning, evidently it’s the tight Twitter integration of Periscope that killed Meerkat because as it turns out, Twitter owns Periscope. By signing in that means when you hit the button to broadcast live, a tweet goes out to your Twitter followers telling them about the event. If they hit the link and don’t have Periscope, they get redirected to the App Store to download the Periscope App.

I was talking to Oliver Breidenbach from Boinx Software about Periscope at breakfast and he felt that they’re making a big mistake making you download an app to watch a video stream. I see his point, you’re adding friction to the viewing audience, which is usually not a good thing. It’s ok to inconvenience the content creators because they have some motivation but if you click a link to see what it is and you have to download an app, it would seem that you’d be really likely to just click away. I’m sure that’s happening but a lot of people seem to download the app.

As a broadcaster, you click the icon to start broadcasting, then you can name the event, and hit the live button. Pretty hard to make it easier than that. Once you start broadcasting you get an icon on screen to switch to the front-facing camera. That’s cool but what isn’t obvious is that there’s about a 1 second pause when you do that. I kept blathering on while it was flipping but after my first couple Steve tipped me off about the delay. To the viewer it just looks like the video was edited, but make sure you don’t say anything terribly important while it’s in the process of flipping.

When people join, you see their Twitter handles come up on screen in the bottom left. They fade away after a few seconds, but if enough people join at once, they actually can cover up most of the left side of the screen for a while. As a viewer, you have the option of tapping the heart button to show that you’re enjoying what you’re seeing. That’s lovely and sweet actually. You can hit it as often as you like, which causes a delightful stream of upwards floating hears covering up the right side of the screen. That means if enough people are joining and liking what your’e doing, you have about half of the screen left at the top to show them something.

My biggest problem is that in any kind of sunlight at all, I am unable to read the text that shows peoples’ Twitter names. I wear bifocal sunglasses so you’d think I could read it but it’s REALLY dim and hard to see! It’s sad really when you want to respond and you can read peoples’ names. Victor Cajiao was saying “hi” repeatedly and I missed him over and over again and I felt badly afterwards!

When you first start up Periscope it asks you if you want to follow everyone you follow on Twitter. We definitely DID want to do this, but for some reason it didn’t really take. For example, Steve clearly follows me on Twitter (that would be a bad mistake if he didn’t) but he did not get notifications on Periscope when I broadcast. After a couple of days of fiddling with it we finally got it working for him but I can’t actually tell what we did to make it work.

Finding old Periscopes is a bit tough. The only way I’ve been able to find mine is to go into Twitter, find myself, scroll back through the tweets I’ve done to find the one auto-generated by Periscope, click the link, agree that it’s allowed to open the Periscope app. I bit of a faff as the Brits would say. I think a LOT better search functionality is needed on Periscope, that’s for sure.

There’s one thing that drives Steve nuts, and it’s that Periscope is designed for portrait-format video only. You CAN take the video in landscape mode, but the comments will all be sideways so it looks really dumb. Steve HATES portrait videos more than he hates rain on his freshly washed car, so this might be a downside to some. If you watch the video we talk about later, you’ll see he even put an apology on screen about it!

Oliver, David Sparks, Adam Christianson and I had a discussion about whether Periscope is a flash in the pan or whether it’s the start of something that will really stick. I’m more on the flash in the pan side of the argument. It’s fun and maybe someone will Periscope a huge event that turns into something big and noticeable, but outside of the tech community (and even inside of it) I haven’t been able to find anyone who has even heard of Periscope.

Oddly though, the pickup of viewers is astonishing. I’ll be talking about a Periscope Steve and I did of our Apple Watch try on session later, and I was surprised to have 115 live viewers, only 1 childish spammer, 22 replay viewers, and just under 700 hearts for this event. I’m curious what you think, flash in the pan or the start of something big?