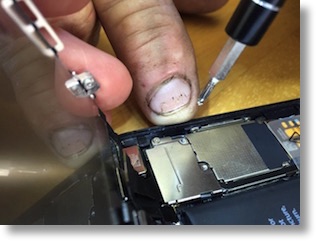 My daughter was nicknamed Jibblies by her roommates in college because she has shaky hands. Most of the time her jibblies aren’t a problem but a few weeks ago she wanted to take a picture and asked her husband for his iPhone…which she promptly dropped and shattered the screen. Two days later, she dropped her OWN iPhone…shattering the screen.

The good news for Lindsay was that when I bought her’s for Christmas, I bought it with AppleCare. I’m a HUGE proponent of AppleCare, especially for things we can carry around. The iPhone deal (in the US at least) is that it extends your hardware warranty from 1 to 2 years and phone support from 90 days to 2 years. But it also gives you two repairs for any kind of accidental damage. You do have to pay $79 for each repair but it’s cheaper than the $109 Apple charges to replace the screen and they give you the refurb on the spot instead of waiting days for a repair, and it protects you from other kinds of accidental damage like that pesky water electronics seem to seek.

Unfortunately her husband Nolan’s iPhone 5 was out of AppleCare because it was over two years old. The good news is that he went ahead and finally upgraded to an iPhone 6+ and is REALLY happy that Jibblies dropped his phone! 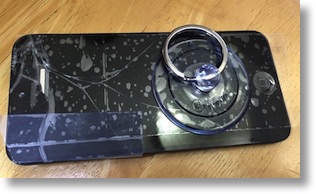 Right around that time, Honda Bob, my long time mechanic and friend (and NosillaCastaway) called me up to tell me that he’d dropped his phone and cracked the screen. Being a mechanic he wanted to fix it himself but didn’t have the tiny pentalobe screwdriver or the tiny suction cup to pull off the screen. I proudly announced that I have the handy dandy 70-piece toolkit from iFixit so I could actually loan HIM a tool. Then I got a great idea – maybe we could have a play date and replace the screens on both iPhones together.

We went out independently to look for screens. He found one through Amazon that was $35 before tax and shipping for the full screen assembly that includes the camera and home button. I’ve been a fan of iFixit forever, especially for all the free instructions you can get for free, so I thought I’d throw some business their way by buying the screen assembly through them. However the price was $65 before tip and tax.

I wrote a question in the iFixit forums there asking whether it was worth the price premium. I explained that I was probably going to go ahead because of loyalty alone but was hoping for more justification from someone, hopefully iFixit themselves. They did get back to me and explained that they test the components themselves and the parts come with a one year warranty so they stand behind their parts. Good enough for me, I went ahead and bought the iPhone 5 Display Assembly from iFixit.

Honda Bob came over and we got to work. Even though we set up on our kitchen table where Steve has put in a lamp so bright white that people tell us we could do surgery in there, we quickly realized we needed more light. I got the standing LED Magnifying lamp my friend Diane convinced me to buy for my cross stitch work and then we were in business. 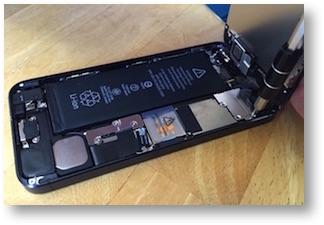 The first step is to take out two itty bitty pentalobe screws, which was really easy. The second step is to pull the screen off using that little suction cup that comes in the iFixit toolkit. That sounds easy too but it was the hardest part for me. You have to hold onto the edges of the phone without touching the glass and then pull as hard as you can at an angle with the suction cup. I’m embarrassed to admit that I actually had to have Bob do the first one because I could not pull it off!

Nolan’s phone was a bit trickier, because most of the screen was shattered so a suction cup wouldn’t stick to it. iFixit suggested covering it with strapping tape. Having seen Bob succeed, I was bound and determined to pull Nolan’s screen off myself and I was successful.

Once we were inside it was actually a cake walk. We had to remove three microscopic screws that held down a very small metal bracket, and then pop off three connectors. I’m not being sarcastic (I know, it’s hard to tell sometimes), it was really easy!

I figured going into this that I would be helping Honda Bob, not because I had better mechanical chops but because he’s got these giant-sized hands made for car-sized parts, not miniature iPhone-sized parts. 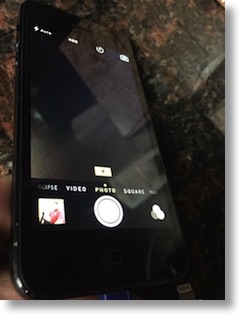 As embarrassed as I was to admit that I needed his help pulling the screen off, I’m even more embarrassed that I needed his help feeding the tiny little connectors back into place. Two of the three cables were relatively easy to align back on their wee-tiny connectors, but the third one really seemed to be too long to bend into position to meet the connector. Bob was able to get the first one in place, and after watching him work it I was bound and determined to get the second one in place and I succeeded.

By the way, to show you what I mean about his giant hands, we took a photo of him putting in one of the tiniest little screws back in place. He really surprised me with his dexterity with those man paws.

We were almost 100% successful with our repairs. With Bob’s phone when we tried to press the glass back in place, we pressed on either side of the button and a tiny crack developed in that narrowest part of the glass. He was going to put a glass screen protector on anyway and it’s barely visible so he wasn’t too distressed by it. I’m not sure if it’s how we put the glass on or by any chance the fault of the component itself. We were very cautious to press on the button area itself on Nolan’s phone and it went back in place perfectly. I can highly recommend doing this yourself if you have the nerve, it was really fun and I’d do it again in a heartbeat.