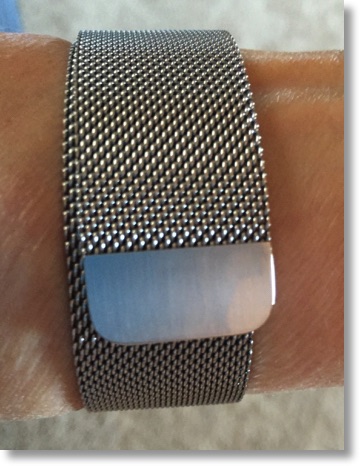 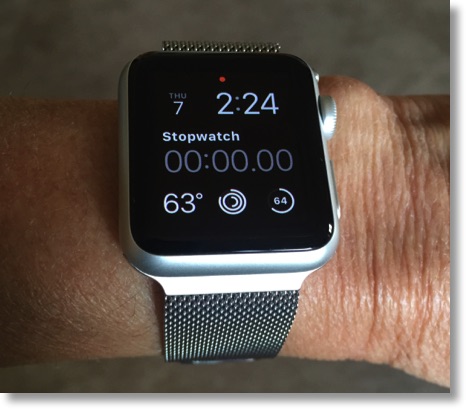 I’m going to hold off on talking too much about the watch this week because I’ve actually not been testing as much as you would have thought I would. That’s because Steve’s watch didn’t come right away and out of solidarity I’m waiting on a bunch of stuff I want to try. The good news is that he’s getting his watch on Monday so we should be able to have some fun. I did want to tell you one thing this week though.

I really drooled when I first saw the Milanese Loop in the Apple Watch announcement. When I went to my try-on appointment the first day after the watch went on sale, I liked the Milanese Loop but it was a bit more industrial looking than it was in the pictures. While the side views in the advertisements makes it look super shiny and elegant, it’s actually a darker grey than I had hoped. I ordered it anyway, shelling out $150 for the privilege.

I got the band on Thursday and I have to say, I like it even less after wearing it for a few hours. It is darker than I wish it was, but it also isn’t terribly comfortable. Like I said last week, the fluoroelastomer band feels like it’s part of my body, but I’m very conscious of the material of the Milanese Loop. The other thing that bothers me is that the band doesn’t stay straight. It’s a lovely piece of engineering that has a magnetic closure so wherever you drop the end of it, it sticks to the rest of the band so in theory it would comfortably meld to your wrist diameter. After wearing it for a bit though, the end sort of slides sideway so that it doesn’t lay straight any more.

I also found that it felt to me like it was going to scratch my MacBook Pro when using it in my lap. The metal hitting metal bothered me a lot. I tried to loosen the band so it would slide up my wrist a bit but it felt really weird there and made me even more uncomfortable with it.

I know I’m being pretty picky here because it doesn’t slide sideways THAT much, and it’s not THAT uncomfortable, and it’s not THAT dark of a grey…but for $150 don’t you think I should REALLY love it? That’s what I think anyway, so the Milanese Loop is going back to the Apple Store tomorrow. I’m toying with the idea of the pink modern buckle band, and I know that sounds seriously icky because I am SO not a pink type of girl, but it looked beautiful on when I tried it back on day one. This one is $250 though so I’m going to have to REALLY REALLY love it for it to get to live at my house! Maybe I’ll wait out those third party bands instead, we shall see!