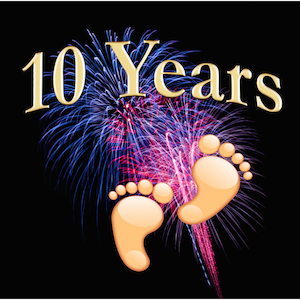 Woohoo – it’s the 10 year anniversary of the NosillaCast on Wednesday! I got to be on Let’s Talk Apple, and listen to the show to get $10 off the early bird pricing for Macstock . Don’t forget to register at midwestmacbbq.com so Barry knows you’re coming to the barbecue too. David Quiring corrects me and sends a link to rechargeable 9V batteries. I explain why I’m returning the Milanese Loop for Apple Watch, and then I cover a lot more about the Photos App: debating whether they really REMOVED things from Photos, how confusing the terminology is inside Photos, and I even talk about what I like in Photos (like the adjustments everyone is whining about. Another interview from CES, this time with Tayzu Robotics about their wicked cool drone that can land in water without being destroyed.

Hi this is Allison Sheridan of the NosillaCast Mac Podcast, hosted at Podfeet.com, a technology geek podcast with an EVER so slight Macintosh bias. Today is Sunday May 10, 2015 and this is show number 522. It’s ALSO the tenth anniversary of the NosillaCast! On May 13th, 2005 I did my very first show. I know we just did a big hoopla about the 500th show, so I didn’t want to make TOO big of a deal about it. However, 10 years in podcasting is a VERY long time.

Podcasting was only started in October of 2004, so there are VERY few podcasts that started before the NosillaCast and of course even fewer that are still going. Leo just celebrated 10 years of TWiT a few weeks back, but is quick to point out that MacBreak Weekly came on after the NosillaCast. Of course Adam Christianson was the groundbreaker on Mac Podcasts, starting even earlier. I’m pretty proud of my staying power but you know that without the listeners and especially those who have contributed over there years it never would have happened. I was going through moving old audio files off of my MacBook Pro and I was astonished at the number of people who have helped through audio contributions. I would try to name you all but I know I’d forget someone and that would be very sad, but know that you helped build what we have going here.

If you haven’t contributed in a long time, grab that microphone and make a recording! I love it when we have listeners do reviews. You know who you are, get back to it! And I don’t say this often enough that I could NOT have done this for 10 years if it weren’t for Steve. You guys don’t see how much he does in the background to make this possible. From telling me to brush my hair before the live show and bringing me a refreshing beverage to buying me lights and microphones, to making dinner so I have time to write, he’s always there. He is actually the biggest fan of the show too – he loves you guys as much as I do. Thank you Steve for all that you do.

Anyway we have a LOT to talk about this week so we should probably get to it!

This week I got to be on Let’s Talk Apple hosted by our very own Bart Busschots, plus Gary Malpas (aka Gazmaz) and Chuck Joiner. It was a lively discussion especially when we got talking about the new Photos app. I hope you’ll go give it a listen, Bart is doing a terrific job with both Let’s Talk Apple and Let’s Talk Photo, both available over at lets-talk.ie.

I hope a lot of you can find your way to Chicago on June 20th. If you haven’t heard, nutcase Barry Fulk has invited ALL Apple fans to a barbecue at his house in the afternoon, and equally nutty Mike Potter of For Mac Eyes Only has created an Apple conference for us to go to in the morning, called Macstock. If you haven’t already registered for Macstock, he gave me a coupon code that will give you $10 off Macstock’s Early Bird ticket price of $69 (bringing ticket down to $59). The code is good through May 31st OR until all Early Bird tickets are sold out whichever comes first. The code is NOT case sensitive, and it’s: NosillaCast10off. Mike has done a fabulous job on this conference, he’s gotten a great lineup of speakers, and I’m not just talking about me! We’ve got Dave Hamilton, Chuck Joiner (who is actually a fabulous speaker no matter how much I tease him to the contrary), Julie Kuehl, Jean MacDonald, Tim Robertson, Guy Serle and Mike Potter himself. Go check it out at macstockconferenceandexpo.com and sign up! Don’t forget to register at midwestmacbbq.com so Barry knows you’re coming to the barbecue too!

A few weeks back when I was talking about the new Audio-Technica wireless mic setup we bought after seeing it at NAB, I mentioned that one downside to our older model was that it used 9volt batteries. I elaborated that they’re a pain because they’re hard to find and you can’t get rechargeable versions.

I have to eat my hat now because David Quiring wrote in to tell me that they use wireless mics at school and they also take 9V batteries, and he knew they used rechargeables. He took it up a notch and sent me a link to a 9V battery charger with a 4-pack of 600mAh Lithium Ion Rechargeable batteries right on Amazon.

The best part is they’re only $25! Thanks David, what a great find!

Did They Really REMOVE Things From Photos?

So Confused – Photos vs All Photos

From good friend of the show Lore Schindler:

A quick break in my email for a testimonial about Clarify. A couple of weeks ago, a colleague at work asked me how she could get a verification when a sent email was opened through our new email system. I was in a rush that day, so told her to ask other colleagues, but a few minutes after I sat down at my desk, I was exploring where that actually was in our email. I opened Clarify, took a few screenshots and wrote some quick directions, then saved it as a PDF and printed it out. Clarify is so simple to use, but let’s me tailor my tutorial document to the needs of my colleagues. It’s one of the main tools in my tech toolbox!

Go to clarify-it.com and check it out yourself!

Research Assistant Steve looked up how long Bart has been part of the show. Bart wrote in for the first time in September of 2006 on show #59. I’d talked about how I couldn’t figure out the command-line interface to the tool Synergy on show #58, and Bart wrote in to tell me about a GUI for Synergy called SynergyKM. Here’s what he wrote:

Hi Allison, I use synergy at work to link my Mac and my Linux box and although I’m not at all afraid of the command line I do like to avoid it when I can. Anyhow, you might be interested in this posting on my blog (bartbusschots.ie ) which has a link and some nice screen shots of a GUI for synergy on the Mac. Been using this for almost a year now with zero crashes so far. Hope it helps!

Steve kept digging and found the first episode of Chit Chat Across the Pond was in NosillaCast #123 in November of 2007 where Bart talked about menu bar problem, Quicklook extension, Leopard cool stuff.

Well I’m afraid that’s going to wind up this 10th anniversary special, many thanks to all of you for helping to make this possible, including the makers of Clarify over at clarify-it.com. Don’t forget to send in your Dumb Questions, comments and suggestions by emailing me at [email protected], follow me on twitter @podfeet. Check out the NosillaCast Google Plus Community too – lots of fun over there! If you want to join in the fun of the live show like Horse did for the first time in a long time, head on over to podfeet.com/live on Sunday nights at 5pm Pacific Time and join the friendly and enthusiastic NosillaCastaways. Thanks for listening, and stay subscribed.