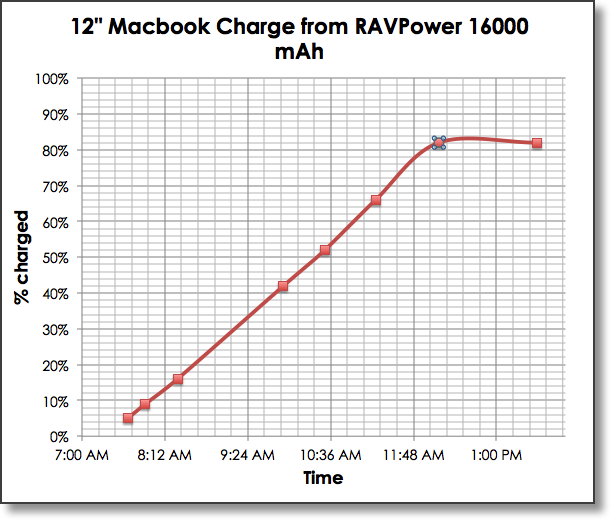 If you’re anything like me, you’re constantly surveying rooms in hotels and at conferences and at friends houses for places to plug in your electronics. Smartphones phones, tablets, computers and now even watches are all seeking a charge. Heck, even my books need to be charged now that I use a Kindle.

One of the great joys of Apple’s recent laptop lines over the past few years is their ever longer battery life. When Apple says “all day battery” they really mean it. The new 12″ Macbook is no exception. I’ve really enjoyed playing with it most of the day and then just charging at night. Many people have scoffed at this adorable computer because of its single port because they worry about charging AND using external devices. But if you never have to plug it into power while you’re going about your day I don’t see why it’s such a big deal.

The new Macbook uses the new USB-C port which is an industry standard. Believe it or not, Apple did not use a proprietary connector. You might be wondering why that matters to you. On all Macs before the new 12″ Macbook (and even the newer MacBook Pros) Apple used their proprietary MagSafe connector, and more importantly they didn’t license it out to anyone. Years ago companies came out with battery packs but Apple shut them down.

But all of that has changed with Apple’s adoption of the USB-C port. You know that little battery pack you bought to charge your iPhone or iPad in emergencies? Would you believe you can charge a Macbook with it? You’ve come to expect facts and data from me, so let me prove it to you.

I have the RAVpower 16000 mAh portable charger ($30 on Amazon) that has a 2amp port for charging a tablet. I thought I’d run an experiment to get some good data for you. I first ran the Macbook down to 3% battery left and in the morning tried to start it up but it was having nothing of that. I plugged in the RAVPower but after about two minutes I was still getting the red battery symbol. I’m sure it would have eventually charged up enough but I got bored waiting and gave it some juice from the wall. I got it up to 5% and unplugged from the wall and then put the portable charger back on.

Throughout the day I opened the Macbook to wake it up and noted the time and the percentage of charge. I took these data points from 7:40 in the morning until 2:10 in the afternoon.

AT 1:35pm I went to check on the Macbook but it didn’t wake up. I thought that was curious, but I used the power button to boot it up. When I checked the charge, it said 82%. I closed the lid again. At 2:10pm again it didn’t wake up, but at least this time hitting the power button woke it up instead of having to boot up. Might have been my bad doing the full boot up the first time. I mention all this because at 2:10pm it still said 82%; the needle hadn’t moved. I think that the Macbook at some time before 1:35pm had fully depleted the battery pack when it hit 82% and after that the Macbook went into a deep sleep. I’m no electrical engineer but it appears that the Macbook, when sensing a power source that’s not supplying sufficient power, goes into a defensive mode.

I plotted the data on the graph in Excel. I asked Excel to draw me a curve, testing out linear, then a few polynomials but it was pretty obvious that on the majority of the graph it was a beautiful linear plot. Since I had 5 good datapoint to draw the straight line, and after that it pretty much flatlined at 82%, I could figure out with some quick cypherin’ where the Mac first hit 82% charged. By now some of you have your eyes glazed over with so many numbers and times (but many are still with me) so let me summarize. I determined that in 4.5 hours I can add 77% battery charge to my Macbook from a $33 phone/tablet charger from the 16000 mAh RAVPower. In addition I can say that at least with this device, the charging is pretty darn linear so you’d get half that charge in half the time. This isn’t speedy but it’s great to know you can carry your power with you.

So tell me, how do you feel about that single USB-C port now?