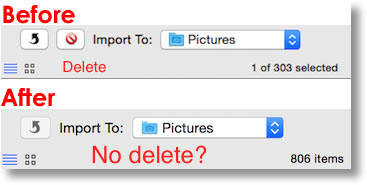 How many times have you run into the problem of an iPhone or iPad that was running out of space? Happens a lot, and if you’re well informed, you know about the hidden jewel of OS X – Image Capture. While not well known, it allows you to plug in your device and view all of the photos and videos as large thumbnails. From there you can select photos to either have them imported into iPhoto or Aperture, or dump them all to your hard drive. Once you’ve executed that maneuver, you can select all (or just some) and hit the handy dandy delete button to remove them all from your device. I can’t tell you how many times I’ve used this to clean up a device.

This week Steve wanted to delete some photos from his iPhone, so he connected it to his Mac, launched Image Capture…but there was no Delete button. I took a look, but I couldn’t find it either. We did a bunch of searching but no joy. I even found the current Apple Support Article where they still say, “You can also select individual items on your device, then press the Delete key on your keyboard” but pressing delete does nothing, and the Delete button simply isn’t there any more.

And then it hit me. There’s no need for this function in Image Capture any longer IF you’re using iCloud Photo Library. To recap, iCloud Photo Library syncs all of your photos on all of your devices, from iPhone to iPad to iPod Touch to Mac. Let’s walk through a scenario on how the workflow happens now. Let’s say Steve takes a bunch of pictures of plants at the store to show me, but later he doesn’t really want all those images clogging up his iPhone. In the old days he would have to tether his iPhone like an animal (TM René Ritchie) and use Image Capture to efficiently get rid of them.

Now that he has iCloud Photo Library, he can pop open Photos on his Mac and select the unwanted photos and hit the delete key and he’s done. All those photos disappear from his Mac and his iPhone. There’s no need for Image Capture to do this and in fact the interface on Photos allows him to see photos in high resolution so he’s sure which one to keep.

Some (or maybe even most?) of you may not have turned on iCloud Photo Sharing. You’ll find that if you connect your iPhone to your Mac and launch Image Capture, you still have the beloved Delete button. By the way, thanks to Allister for helping me get a screenshot for the show notes of the Delete button in Image Capture (and George for offering to help). I had trouble proving the Delete button was still there because even though I have an unconverted Mac, both of our phones have been converted so even there the Delete button doesn’t show up.

I know this will still bother some people but it makes so much more sense to be able to delete photos in your real library on your Mac and have them disappear everywhere, than it does to have some arcane application most people don’t know about with a secret Delete key, doesn’t it?

49 thoughts on “Why is Delete Missing from Image Capture and Why Is That OK?”