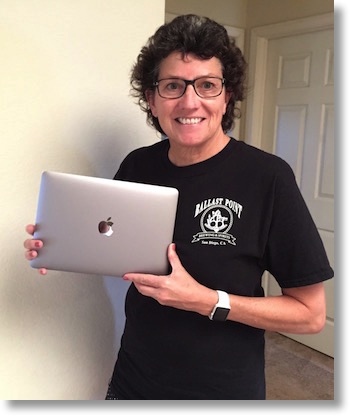 I’ve always used one computer at a time, while others have a desktop and a laptop. Because I only had one computer, I have always gone for the fastest machine I could buy with the most storage and RAM Apple could build into it. That also means I bought only laptops, not desktops. I think the last time I had a desktop it was when Steve and I shared a G4 tower!

My Macs do some fairly heavy lifting. I don’t edit video, but I do broadcast live video while recording and editing audio. That drives the purchase of a high end processor and a lot of RAM. Disk is an issue too, since I create a couple of gigabytes of audio files a week. Again, it’s not video files I’m creating but, those audio files do stack up. But that’s not the primary thing that drives my need for disk. The primary thing is that I really want ALL of my photos with me everywhere I go.

I take a lot of photos, and I go to great effort to organize and name my photos so that I can instantly find them. If someone brings up Halloween costumes, I want to be able to instantly bring up the picture of my mom and dad dressed as Tarzan and Jane while my mom was super pregnant or the crazy bat costume my dad made for my brother Grant. Someone says sailboat, and they’re going to see a picture of Windride, the sailboat I grew up on. It makes me really happy to be able to do this.

However, the game has been completely changed with the new Photos app.

I realize that I could have all of my photos, all 382GB of them sitting on my MacBook Pro with the 1TB drive in all their glorious resolution but also have them on another Mac by choosing to only have optimized images. That second Mac wouldn’t have to have great gobs of storage. Since I would still have my Retina MacBook Pro to do the heavy lifting of production of the podcast, maybe I could get away with something light and thin and lower powered. Maybe I could have the new 12″ Macbook!

I thought this was a silly and extravagant idea (and it’s definitely the latter) but Steve decided that I should get it for my birthday that had just passed. I couldn’t argue that logic so I placed an order for the Space Gray 1.2GHz model with a 512GB SSD and 8GB of storage. Ok, so that’s still a pretty big disk but for ME it’s small!

And then I waited. And waited. And waited. It was on 4-6 week delivery like just about everything else that Apple sells these days! We happened to be in the Apple Store and on a lark, Steve asked the guy if they had any in stock. He told us they didn’t but that they get a few in from time to time. From that day on I called every day to the nearest Apple store, and then started calling farther away and on Thursday I was rewarded – they had one in stock at the Santa Monica Apple Store so I raced up and bought it.

I’m sure I’ll be talking more about it but I have to say, I am in LOVE with the 12″ Macbook. My Macbook Pro weighs 4.5 pounds, while the Macbook weighs 2. Now 2.5 pounds less doesn’t sound like a lot but that’s a HUGE percentage difference. The other night Steve handed me his 13″ Macbook Air to show me something and I couldn’t believe how HEAVY it felt! It weighs in at a whopping 3 pounds. That’s 50% more than my Macbook! I’m not joking here, I seriously thought he was handing me my MacBook Pro.

A real question will be where this device fits in the near continuum of Apple products I’m now using. MacBook Pro, Macbook, iPad Air, iPhone and Apple Watch. Man, they sure saw me coming, didn’t they? I’ll be talking over the next few weeks about what tasks have moved to which devices, how well a one-port device works, and how I’m figuring out how to share devices between new Macs. I’m sure many of you have conquered this already so if you have advice for me I’d love to hear it!

And that’s how Apple’s Photos App convinced me to buy a 12″ Macbook!