Engadget Live video interviews: Engadget Live – Setrakian’s Art of Robotics, Engadget Live – Eclipse VR Game, Engadget Live – Ario Healthy Lamp, and Engadget Live – Lenovo. 2.4 & 5GHz Dual-Band Routers – Should You Give the Bands the Same Name? Why I Will Always Buy from OWC. Router, Access Point, Firewall, Media Server, Battery – All in One with HooToo Tripmate Titan TM05 for $60 at Amazon. In Chit Chat Across the Pond Bart goes through a GIGANTIC amount of Security Lite, and then teases us with some easy ways of running his awesome password creation tool HSXkpasswd from the terminal.

Hi this is Allison Sheridan of the NosillaCast Mac Podcast, hosted at Podfeet.com, a technology geek podcast with an EVER so slight Macintosh bias. Today is Sunday August 23, 2015 and this is show number 537.

This week Steve and I went to a “little” event called Engadget Live in downtown LA. Think CES but instead of 12,483 booths covering 126 square miles, it’s one room with maybe a dozen booths. I applied for press entrance for us so we got to go in an hour before the general public so we got to have full access to the vendors before the crush of humanity came in. We only did four interviews but they were super fun. Instead of including the audio for these four into the podcast I’m going to link to the videos Steve created and let you watch or listen off line if you’re interested. Let me know if you like this better than the way we generally do it, where they’re included in the show.

First we interviewed Mark Setrakian who started out at UCLA in what I think was mechanical engineering but then he slid sideways into designing monsters and in his latest work has designed this super creepy art project he calls the Art of Robotics. They are mechanized robotic hands with creepy monster claws that slowly rotate a globe in space, and you have to see it to appreciate how mesmerizing it is. He also tries to convince me that there IS an A in STEM.

Next we got to play a virtual reality game that’s still in its infancy. The game is called Eclipse from White Elk Studios. It’s a first-person exploration game developed by the former God of War team. I loved talking to Jonathan Hawkins because he didn’t mock us at all for not knowing how to use Playstation controls while wearing an Oculus Rift headset. They built into the game a feature for newbs like us – if you need to push something on the controls, you can look down and see virtual hands holding a virtual controller with the right button highlighted. Experienced gamers will never notice this so it doesn’t get in their way. Both Steve and I found the game to be incredibly immersive and the very smooth frame rate made it not very urpy (maybe a LITTLE bit urpy but not bad). We were entirely sucked in by this game. We missed it in the interview but after we talked to him he explained that Eclipse will be a PC game but he was running it off of a MacBook Pro with an external specialized graphics card connected via Thunderbolt and in a home-built enclosure. Pretty cool stuff. 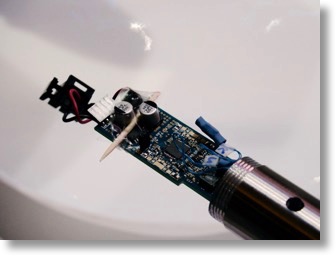 In probably the most entertaining demo at Engadget Live, we saw the Ario Healthy lamp which automatically adjusts light color and direction to support your body’s circadian rhythm. The reason it was entertaining was be cause when we first arrived at the Ario booth, Brian Hoskins the business guy was trying to figure out how to fix the lamp because it got damaged in shipping. Steve did a Macgyver and fixed it using a piece of foil to bypass the blown soldered-in fuse, and then taped a broken toothpick across it to hold it tight. In the video you’ll see that the light is blinking but later we saw it had stabilized so that Brian could do good demos for everyone else.

And finally we got to play with two interesting Lenovo tablets, the 8″ Yoga Tablet 2 with Windows and the 13.3″ Yoga Tablet 2 Pro running Android. The Tablet 2 uses “AnyPen” technology that supports the use of any metallic object as a stylus, including a graphite pencil or even a fork, which was my favorite part of the demo. The Tablet 2 Pro has a projector built into the base of the tablet that can project up to a 50″ 16×9 image which looked pretty cool.

Many thanks to Steve for cranking these videos out this weekend so you could enjoy them all at once!

2.4 & 5GHz Dual-Band Routers – Should You Give the Bands the Same Name?

Why I Will Always Buy from OWC

In working on my network settings playing around with switching my Airport Extreme to go from a combined to separated band network, it occurred to me that my friend Diane might be able to isolate a problem in her network if she knew she could separate her networks. I whipped open Clarify, flipped through the settings in the AirPort Utility and hit command-shift-2 on each window as I went through the necessary screens, which automatically plopped screenshots into an open Clarify document. After that it was only a matter of dropping in some arrows and boxes to highlight what she needed to click, and then adding some text to go with each step to explain why she would want to choose these options. Boom, full on tutorial for her to test at her leisure, guaranteed to minimize the amount of time I’ll have to invest explaining the steps for her. I haven’t posted it yet, but I’ll definitely hit the little Share to WordPress button so if anyone else is wondering how to do it they might find it under Tutorials on Podfeet.com.

If you help other people, on Mac or Windows or both, get yourself a free 14 day trial of Clarify from clarify-it.com and when you’re ready to buy (because you know you will) be sure to tell them Allison sent you!

I know it’s become a cliché that Jobs was a visionary, but he really was – if you don’t believe me, just look at this 1996 interview about the Internet – this was BEFORE the .com boom, but it reads like a history written after the event! – http://evgenymorozov.tumblr.com/post/15396323139/steve-jobss-interview-with-red-herring-1996

(it might be helpful to re-read the JSON primer from last time before starting: https://www.bartbusschots.ie/s/2015/08/08/json-a-quick-intro/)