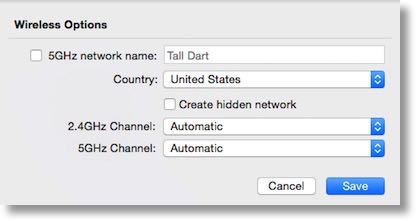 Dave Hamilton of the Mac Geek Gab is a brilliant man and you should always listen to his technical advice. Part of his advice about life in general is to always question the experts, which means you should question him!

A while back he gave some advice on naming of the two bands in routers that offer both 5GHz and 2.4GHz bands, also called dual-band routers. The more recent Airport Extreme is dual-band and since I own one of them, I was very interested in his advice.

The good thing about dual-band routers is if you have devices that can only run on 2.4, like our old TiVo wifi adapter, those devices can connect at 2.4GHz, while your new-fangled devices can play happily in the much less congested space of 5GHz. Ages back we solved Steve’s wifi problems on his iMac by moving it to 5GHz because 2.4GHz is so congested where we live.

This creates a problem though because you’re constantly having to manage your devices and keep track of which ones go on which band. Dave’s brilliant suggestion was to name both bands by the same name. This allows you to select a single network name (aka SSID) for every device. Then the router and device will just chat with each other and work it out amongst themselves. You don’t have to worry your pretty little head about it.

The Airport Extreme method of setting up one network name is a bit counter-intuitive. You don’t see a check box that says something useful like “make both networks the same name”, instead you drill down into Wireless Options in the Airport Utility and UNcheck a box that says to give the 5GHz network its own name.

So Dave’s advice is brilliant…or so I thought. Let me tell you three stories before I explain the problem with following his advice.

By now I’m just guessing that several if not many of you have figured out the common thread between the WeMo Switches, the Nest Protects and the HooToo networking devices. All three of them ONLY work on the 2.4GHz band and for some reason were not being gracefully handed off to the correct band. In every case, when I switched the network back to two distinct names, all three devices INSTANTLY connected.

The good news is that also in all three cases, once the device was successfully on the 2.4GHz specific network, I could put the switch back to naming them the same and the devices all worked just fine.

Now I’m not saying Dave Hamilton was wrong, but evidently with my tiny little brain in charge of remembering that some devices don’t do well when the router and the device have to have a conversation about which band they should be on during the initial setup, I think it might be a bad idea for me. I’ve put it back to the single name because I’m hoping that by having the problem bite me THREE TIMES and by writing this article, there’s at least a 20% chance I’ll remember immediately the next time it happens. Or I won’t and you’ll get to hear this whole story yet again.