George from Tulsa has been on a tear in the NosillaCast G+ community lately posting all kinds of cool deals on tech gadgets. A while ago he posted about a cool looking product called the HooToo Tripmate Elite HT-TM04, and I ran out and bought it immediately. Before I get into details here, HooToo has created many products, some of which include portable router capability.

Remember my discussion about how I have my networks combined and because of that I keep having trouble setting up networking devices that require 2.4GHz? Well I worked for WEEKS on the HooToo Tripmate Elite with Amy from HooToo to try and figure out why I couldn’t connect to the Internet with it. She even went so far as to send me a review unit of the TripMate TM05 in case something was wrong with the TM-04. Of course nothing at all was wrong with the device, it was the 2.4GHz network problem I discussed earlier.

Ok, fine, now I was ready to tell you all about the TM04 since my writeup was 90% finished. But by that time, I went online and instead of the $54 I paid for the device, the device has skyrocketed to $130 for used ones because HooToo appears to have discontinued the product! Grrr. I guess that’s better than if I had told you all about it and before you could push buy the price went up, right? The good news is that I can give you instead a review of the TripMate Titan Versatile Wirless N Travel Router, or TripMate TM05 for short. Now that I’ve given this giant preamble, let’s identify the problems we’re trying to solve for which the TripMate TM05 might be the solution.

If you’ve got an Apple Airport Express you can take care of some of the networking problems, and we all know there are zillions of cool battery chargers for your devices, and we’ve even talked about devices that let you share music and movies between your mobile devices. But what if you could do that all in one compact device; that would be even cooler, right?

The TripMate TM05 is around 1.5 x 1.5 x 4 inches and weighs around a half a pound. It has a 100Mbit/s Ethernet port on one side which allows you to create a wireless network from a wired connection. It has a micro-USB port to charge its internal battery and a 2.1amp USB port to charge your devices, even the power hungry iPad Airs. This same USB port will support USB devices including 4 port hubs to allow you to share files across the TripMate’s wireless network.

I’m a fan of blinky lights to give me information, and the TripMate TM05 does not disappoint. It has an obvious power button that is a recessed dent on the top so it’s easy to find. When you press it once it lights up between 1 and 4 lights, where 4 lights represents 100% charged, 3 means 75% charged, etc. I hate devices that either don’t tell you their charge OR do it so badly you’re never sure. These same lights blink in succession during charging so you’re sure you’re actually charging the device too.

If you do a long press on the TripMate TM05, the lights will blink on in succession until an indicator light tells you that it’s starting to broadcast a wireless signal.

If we can step away from hardware for a moment, I want to praise the folks at HooToo for their excellent manuals. They’re clear, concise, include good images, and they have separate manuals for Android and iOS and Mac and Windows. I better be careful, this is the third and his many weeks that I said something good about about a manual. I’m going to lose my reputation as a non-manual reader! The manuals are helpful because there are a couple of different ways to set the HooToo TripMate Elite up as a router. Remember I said you can use it to extend an existing network, or you can use it as a standalone wireless router. 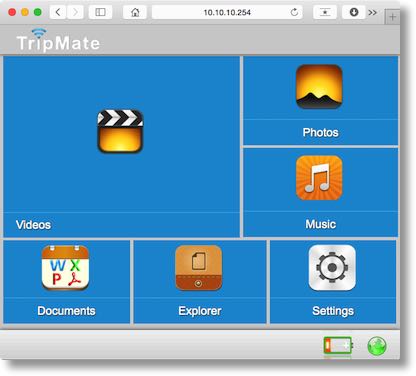 If you set up the TripMate TM05 via your computer, you simply turn it on, connect to the network it creates, and then navigate to 10.10.10.254 which allows you to log into the device much like any other router. The setup screen is graphic with nice buttons. You can go through a setup guide, or you can click on Settings, go into network and get busy. I tested the interface using VoiceOver for the visually impaired and almost everything is labeled. The Home and Back buttons are both labeled as “link” which is much less than helpful but everything else seemed to be labeled correctly. I’ll make sure they get a note on that so they can fix it up.

In the settings I was able to point the TripMate TM05 to my home router over wifi and authenticate using WPA2. This is the very crucial step where you have to make SURE that you’re pointing the TripMate to a 2.4GHz network.

I tested using the TripMate TM05 plugged into my router via Ethernet and connected to my home network via wifi and both worked flawlessly to let me out to the Internet. This means the TM05 meets our requirement of giving us wifi in a hotel with Ethernet, and putting us behind a firewall so we don’t have to use a VPN to protect ourselves Note: Bart explained after I posted that a router does NOT stop man in the middle attacks so a VPN is still required for public wired/wireless Internet safety. The TripMate instructions do tell you to change the wifi password and the administrator password (which is blank by default). If you don’t do that, don’t be expecting this to be a secure firewall!

The TripMate TM05 has a 10,400mAh battery in it to charge your devices. To put that in perspective, the iPhone 6 has a 1900mAh battery in it so you could charge your phone 5 times (or 5 iPhone 6s once) with this battery. if you’ve got an iPad Air 2 at 7340mAh, you could charge it about 1.5 times. That’s a pretty impressive battery and does explain why it weighs a half a pound. That’s not that much but since it’s so compact it’s very dense so it feels heavy.

So we’ve covered battery charging, extending a wireless network, creating a firewall, how about playing video and audio files? I tested the TripMate TM05 using a USB thumb drive. I dragged an image, two (non-DRMd) songs, and a home made video onto the thumb drive and plugged it into the TripMate TM05, and it didn’t work. Then I read the (excellent) documentation and learned that the USB drives must be formatted NTFS, FAT16, or FAT32. I guess that’s reasonable since that’s kind of the lowest common denominator between Macs and PCs so I reformatted the drive to FAT32 and that worked. Unfortunately the drives I have with ripped movies for travel are already formatted to Mac OS Extended Journaled so if I want to use this for travel I’ll have to reformat and reload the drives.

From iOS and Android, the process is pretty much the same to access the TripMate TM05’s web interface. Power up the TripMate TM05 and hold the button down till the four lights blink, connect to the wifi network it creates and enter the password for the connection, then simply open 10.10.10.254 and enter the admin password (I set both to the same password so I wouldn’t have to remember two logins) and you’re able to see all of the media on the connected USB device. It seems kludgy to need to log into the admin panel via that IP address, but after you’ve accessed it once, when you simply type 10 into the URL field, your mobile browser will probably autofill the rest. I was able to play the music, the video and see the images I put on the thumb drive. You can also put plain old documents on the drive and view them from the TripMate TM05.

If you travel often and would like to watch movies on the hotel TV, the HooToo TripMate TM05 might have one more trick up its sleeve for you. Armed with an inexpensive Chromecast you can connect it to the wireless network created by the TripMate TM05 and broadcast video from an external drive up to the big screen in your hotel room. Unfortunately in our experience, a lot of hotels have the input for HDMI disabled, which is just plain mean of them. We’ve brought our AppleTV along to various hotels and not once have we been able to use it because we can’t change the input of the TV to HDMI. Maybe you’ll get lucky though or you travel to hotels that aren’t so mean. It’s a small price to pay to trow the tiny little Chromecast and it’s power supply into your bag just in case it would work for you.

I found a lot to like about the HooToo Titan TripMate TM05, for $60 and I will definitely be taking it on travel with me. It’s a great battery charger, will give me a firewall while on travel, I won’t need to use a VPN to protect myself on hotel wifi or Ethernet Note: Bart explained after I posted that a router does NOT stop man in the middle attacks so a VPN is still required for public wired/wireless Internet safety, it will let me broadcast my own wifi from Ethernet, and I’ll be able to play video and music from an attached USB drive. Throw in fantastic customer service and really really good documentation, what more could you ask for only $60 for the HooToo Titan TripMate TM05 from hootoo.com.