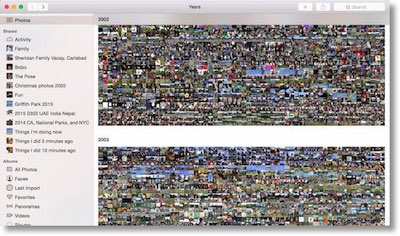 When Photos first came out, people broke into two camps. There were the people who were super bummed because Apple stopped developing Aperture and made it pretty obvious that they valued the low end photo user well above the prosumer or professional photographers. The other group looked at Photos and thought it looked like a nice upgrade from iPhoto. I chose to play the optimist and jumped with both feet into Photos.

I don’t want to retell all of my tales, but in case you haven’t been following me for very long, I’ll do a quick recap of what I said a month into using Photos. I moved over 60K photos over to Photos from Aperture, and paid Apple $100 per year to get the 500GB of iCloud Photo Library storage space. I found that if you figure out how to reveal the more hidden tools, it’s pretty darn capable. I loved having all of my photos available on my MacBook Pro in full resolution, and also optimized images on my MacBook, my iPhone and my iPad.

I thought it might be interesting to talk about my perspective now that the honeymoon is over. The excitement of having all my photos on all of my devices has become a normal expectation, the tools are second nature, what are the long term feelings about using Apple Photos on an every day basis?

I have to admit this subject came to mind because of what I don’t like rather than new discovery of things to love. Probably the biggest downside for me is the effect on my iPhone when taking new photos. Right after you take a photo, you want to see it, right? A simple tap on the image in the bottom left of the screen while still in camera mode in theory will bring up the photo. With 60K+ photos in my optimized library, that simple tap takes forever to bring up the photo. I define forever is SO long that I close the camera, and open Photos to see it. I thought maybe something was wrong with my iPhone but I asked Jason Snell who also has 60K+ photos in his library and he said it was super slow for him too.

The next thing that bothers me doesn’t seem like it’s because I have so many photos. If I take a photo with my iPhone, I often want to post it immediately. Makes sense, right? Remember I have optimized images on my iPhone and as soon as I take the photo it seems to send the full version to the cloud so that when I tap on the image, I often have to wait for the optimized image to come back down to my device. It’s not super long (wouldn’t call it forever) but I think maybe they could give you a minute to post the photo before shoving it up to the cloud.

Let’s switch over to the MacBook and how Photos works on it. I am still loving this little machine. I love how light it is, and surprisingly I love how fast it is. Unless I’m in Photos! The other day I noticed I had about 8-10 applications running at the same time and hadn’t even noticed a performance hit (I have 8GB of RAM). But when I’m in Photos, everything takes way longer than it does on my MacBook Pro. I actually didn’t think it was that bad because I do most of my photo work when sitting on the couch watching TV with the MacBook but I made the mistake of using the MacBook Pro the other day and dang was it WAY faster.

The biggest lag is how long it takes to open the library. I timed it (with my Apple Watch) and it took FIFTY THREE seconds till I saw the first photo on screen! I timed it twice to be sure, thinking maybe if it was already cached it would be faster, but nope, still 53 seconds. The left sidebar doesn’t even render till 46 seconds in. I think we could put this in the category of “forever”, don’t you?

Once I’m in, there’s nothing that slow but it gets tedious to work on photos because the menus take a while to open. I did figure out that if I hit the enter key it goes into edit mode, then I can hit Adjust which reveals the more interesting tools and adjust the photo. If I manage to resist the urge to click Done or the enter key which does the same thing, I can use the arrow key to go to the next photo and start editing without drilling down into the menus.

Oddly Photos has a lag where you can’t hit the right or left arrow too quickly to flip through the photos, you receive a BONK noise if you go to fast, so I am always getting bonked for trying too work quickly. Not sure if that’s the MacBook, the giant photo library or Apple Photos at fault for that one.

I would be remiss if I didn’t mention what tools I’m missing from Aperture. Apple Photos has a bandaid icon called Retouch which works for things like healing a blemish on someone’s face, or maybe a small spot of water damage on a wall. If you want to erase a kid who’s photobombing your brother (and it’s not a well-executed photobomb) the bandaid will not cut it. Have a screenshot you need to post but it’s revealing some sensitive info? The bandaid is only going to smear it around and make it look stupid. Even though you can option-click to find a source area, it still just smears things. I really really want a true clone tool in Apple Photos.

Aperture’s biggest advance before it was stalled was adjustment brushes. You know how you can edit a photo to make it lighter or darker or change the hue or saturation of the entire photo? In Aperture you can do that very selectively using adjustment brushes. Let’s say grandpa’s cap is shading his face in a photo, you can use the dodge tool selectively with a small brush to brighten him up to match the rest of the photo. I DO miss this more than I thought I would. I know I can export the photo and open it in Aperture but it’s a rather tedious process so I haven’t actually done it much. Would love to see in Apple Photos 2.0 a feature like that. I’ve heard that in the next rev we’ll have Extensions so maybe we’ll get an extension for the more advanced functions by some brilliant developer.

Overall I’m still really enjoying Photos, and I do still love it when someone brings up something that happened ages ago and I can do a quick search on my phone and bring up the photo from that event. I still think that the existing editing tools work pretty well, and provide the adjustments I use constantly even if some of the more advanced tools aren’t there. I’m pleased with my new ability to view JUST my videos which was something I couldn’t do in Aperture. I’m sticking with Photos but I am looking forward to what Apple brings us in the next revision.

2 thoughts on “Apple Photos Now That the Honeymoon is Over”