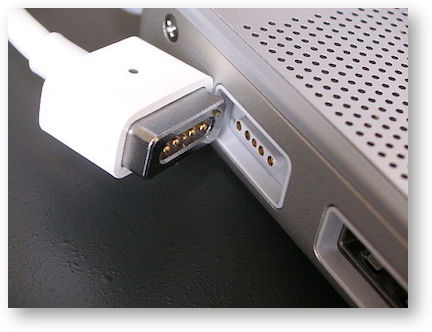 When the MacBook and later the MacBook Pro came out with only USB-C there was a lot of moaning and groaning about dongles, but mixed reactions about the loss of the MagSafe power connector. It was designed to break away if someone hit the cable so your laptop wouldn’t go skidding across the table and onto the floor. Some people loved MagSafe, some didn’t. I was in the love category.

Remember when Steve Jobs introduced MagSafe and his memorable quote was, “You’re tired of breaking them, and we’re tired of fixing them”?  I was sold.  Countless times that MagSafe connector saved my laptops over the years.

I’ll never forget the time I was at my friend Melanie’s house. I had my laptop on her desk, and I purposely stretched the power cable across the room to the outlet on the other side of the door. We worked away for a bit and then her giant Labradoodle ran through the doorway. The MagSafe connector popped off of my laptop instantly and the Mac didn’t budge on the desk.

I grabbed the power cable and showed it to her. I explained how it had just saved my laptop and that I had purposely set it up that way in hopes of demonstrating the effectiveness of this cool new design. A teaching moment, right?

But then, while I was very firmly grasping the MagSafe end, her BIGGER dog, a Great Dane came barreling through the same doorway. Since I was holding onto one end, the end plugged into the wall outlet was ripped out, bending the pins. I couldn’t believe it. I was able to bend it back but it sure wrecked my “teaching moment”.

Back to 2016. We’ve got these sell new laptops but no MagSafe. The folks at Griffin make really good hardware, so when I saw the BreakSafe Breakaway USB-C Power Cable I put it on my Christmas wish list. I would finally have a Mag-Safe like connector on my MacBooks.

The BreakSafe cable is a pretty cool idea, but sadly it fails in execution. On one end there’s a traditional USB-C cable, and the other end is magnetic. The cable comes with a second piece that has a matching magnet on one side, and a male USB-C on the other side. Plug that little piece into your laptop and then connect the magnet and you’re in business.

I connected the cable to my laptop as I just described and plugged it into power.  I then lifted my MacBook Pro up off the desk and immediately the cable’s magnet popped right open.  So far so good.

Next I continued to hold the MacBook Pro in my hand while I reconnected the magnet, but it fell right out. Sadly the cable’s magnet cannot hold its own weight. I even tried setting the laptop on the desk and just slightly adjusting the location and the power cable disconnected.  The magnet is not nearly as strong as it needs to be to make this useful. I believe that you’d often find yourself with an uncharged Mac if you use this cable for power.

So as much as you might miss the MagSafe connector on the new Mac laptops, don’t waste your money on the Griffin BreakSafe USB-C cable.

3 thoughts on “Missing MagSafe on Your USB-C Mac? Griffin BreakSafe Isn’t the Answer”