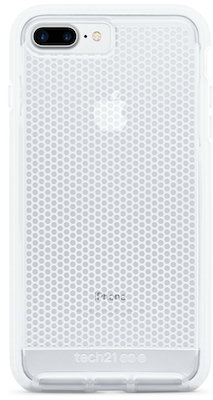 You know that feeling when you first get a new iPhone? When you pull it out of the box, and it feels so sleek and shiny? You carefully cradle it in your hand and feel great joy. But then something changes. The joy turns to fear when you realize you’re standing over a hard floor. You grip the phone with both hands and carefully tip toe over to the couch where it will be safe if it falls a few inches.

We love these phones, but they’re slippery like trying to hold a goldfish. When Lindsay, Kyle and I got the iPhone 6, within one week all three of us had dropped our phones, and only two of us got lucky.

So here I have the new hotness, the iPhone 7 Plus, and I had to put a case on it. Pat Dengler picked out a very nice case for me from a company called tech21. It’s called the Evo Mesh Case for iPhone 7 Plus and it’s $40 at Apple. I was looking for something that would show off the gold and white of my new phone, and the Evo Mesh is perfect for that. It’s got a white rubbery bumper, and a clear back with dimples in the clear back that made it look really cool. But. It’s not sleek, it’s not smooth, it’s practical.

I’m a huge believer in AppleCare on all of my devices, especially on the slippery goldfish iPhones. I’m not sure it was that great of a deal though, because if you broke the screen on an iPhone 6 it would cost you $79 to get it repaired, and $99 if you broke an iPhone 6 Plus. But with the iPhones 7, Apple changed the pricing dramatically. Now it’s only $29 to get either phones’ screen replaced. That changes the risk factor now, doesn’t it? 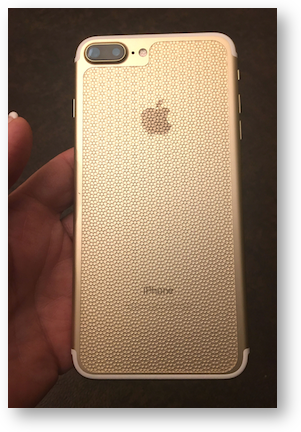 I was talking to our good friend David Roth about how sad it made me to put a case on my iPhone 7 Plus, and he suggested I try egrips. I hadn’t ever heard of this product before. He explained that egrips are a silicone sticker that you apply to the back of the phone. I know, that sounds icky and kludgy, doesn’t it? David is a classy guy who likes nice things though, so I knew it wouldn’t be icky. I decided on his advice alone to give egrips a try. I bought the egrips for the iPhone 6 Plus that David said would fit the iPhone 7 Plus just fine. It was $22 on Amazon

egrips comes stuck to plastic on both sides. You peel off one side and then stick the other side down on the phone. Steve loves to do stuff like this, says I’m not careful enough so I let him have at it. He followed the instructions and of course he got giant bubbles under it. He kept at it though, pulling the egrips up and putting it back down, and eventually he got it bubble free.

Ok, so how is it? It’s glorious. First of all, it looks fantastic. It’s clear, so it takes on the color of the gold phone, and yet the mottled surface makes it look sparkly in the sunlight. But more importantly, it really truly helps me hold onto the phone. Remember when I first got it I told you I couldn’t type on it with two hands because it was top heavy? I can type just fine now with egrips on the phone.

I’d be tempting fate if I said I’m sure I won’t drop my phone now, so I won’t say that, but it feels really secure in my hands and I think I’ve reduced the probability of it being dropped by 90% vs. going caseless. Now if it DOES drop on a hard surface, it’s really only protected from damage if it dropped flat on its back. And we all know that’s not how it will fall.

If you really want to use your phone without a case, and are willing to take the risk if it does fall, I highly recommend checking out egrips to help keep you from dropping your phone.