Last week I told you about how the new MacBook Pro won’t run a DisplayPort monitor. I quoted the Apple support article that explains that their USB-C to Thunderbolt adapter simply will not work with any DisplayPort display, including their own legacy monitors.

I explained how my darling husband Steve swapped monitors with me so that I could use his Thunderbolt Apple Cinema Display with my new MacBook Pro. Steve also gave me his Belkin Thunderbolt dock so I could keep just one cable plugged into my laptop. It’s still working great, but the plot thickens.

This week, I got an email from Dave Price, long time NosillaCastaway, and Apple Certified Support Professional of TekBasics in Dunstable, MA (www.tekbasics.com). 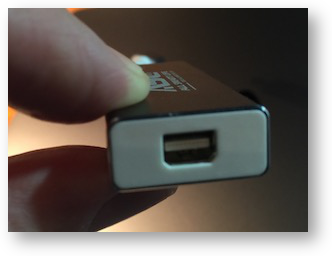 In Dave’s email he explained that he was awaiting arrival of his new 13″ Touch Bar MacBook Pro, and like me, he also has a DisplayPort Apple Cinema Display. He found a company called AllSmartLife that was selling a USB-C to Mini DisplayPort adapter specifically for the new MacBooks. The adapter was $22 so Dave decided it was worth a try to see if it could keep his $1000 monitor in use for a few more years. I told him it probably wasn’t a waste of money because it had other uses, but I pointed him at the Apple article and told him it would never work with his display. 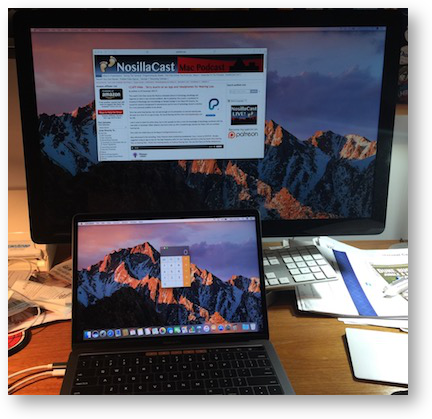 A few days later, Dave sent me a photo after he got the adapter. It clearly showed his 13″ Touch Bar MacBook Pro happily running his DisplayPort Apple Cinema Display. He gets extra bonus points for having podfeet.com up on the screen. While Dave seemed to know what he was talking about (he hadn’t yet told me he was Apple Certified), I still didn’t believe him even with his photographic evidence.

We compared monitors and found that while my Apple Cinema Display’s cable carries USB, DisplayPort and power, his only carries USB and DisplayPort. I thought maybe he really had a Thunderbolt Display and was mistaken that it was DisplayPort, because Steve’s has just those two cables. I suggested he send me a screenshot of his System Information about Graphics & Displays. But sure enough, his display matched mine nearly identically, saying clearly that it was DisplayPort, not Thunderbolt.

Dave and I exchanged about 26 emails as we noodled this, and he expressed joy that I was enjoying the experimentation here as much as he was, and I felt exactly the same way! I can’t tell you how often someone writes with a problem and I suggest 11 things to try and they never write back to tell me what happened. Dave is clearly my people. 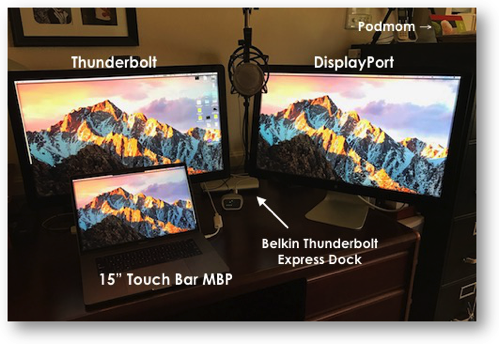 Steve made the mistake of leaving me alone this afternoon, so I stole my old monitor back. The Belkin Dock actually has two Thunderbolt ports, so instead of swapping out the Thunderbolt monitor, I added the DisplayPort monitor.

And guess what? BOTH monitors worked simultaneously. I was able to run both a DisplayPort and a Thunderbolt monitor using the Belkin dock. Do you think it will take long for Steve to notice that I’ve got both monitors now?

Now I can hear some of you hollering at your audio device telling me that you probably can’t run Thunderbolt devices with Dave’s $22 adapter from All Smart Life. I suspect that’s true, but remember the DisplayPort monitor from Apple doesn’t have Thunderbolt ports anyway so we’re not losing a thing. You can still put a regular USB-C to Thunderbolt adapter in another port on the Mac, and run other devices that way.

If Apple had come out with a spiffy new monitor they wanted you to buy, maybe we could assume it was a money grab, but they clearly got out of the display business this year. Why on earth didn’t they make the adapter work with the $1000 monitors they sold to me, and Dave, and Katie and a lot of other people? If someone can explain this, I’d love to hear it.