Now that the logo is done I had no excuse for not getting the show going. I mentioned earlier that I also thought this week would just be that much more challenging if I also changed recording software. Apple has been on a tear lately either abandoning software altogether (like Aperture) or coming out with a new version that loses much of what we know and loved. One you may not have tracked is GarageBand. A while back (more than a year) Apple rewrote GarageBand and it’s worthless for podcasters. I’ve hung onto the old 6.0.5 version all this time but I live in fear that they will one day come out with an OS update that renders it unusable. After 10 years of podcasting with GarageBand as my Digital Audio Workstation, I switched over to Amadeus Pro from hairersoft.com.

I did it with the help of a couple of people. Listener Damashe Thomas and I connected over a Skype session so I could help him learn Audio Hijack and then we got to talking and he told me how great Amadeus Pro is, so I started draining HIS brain about it. Kevin Jones also told me that he uses Amadeus Pro, and somewhere along here I found out that Bart uses it! Funny that it came around that way. I should point out that now 2/3rds of the Amadeus Pro users I know are blind.

I’ll probably talk more about Amadeus Pro and what I think of it later but I do want to also give a shoutout to Garth Humphreys who started answering my questions in the Amadeus forum and then wrote me great, detailed explanations later in email that helped me get a workflow that I think will work for me. If you’re hearing this, then thank Garth!

The Rest of the Gory Details 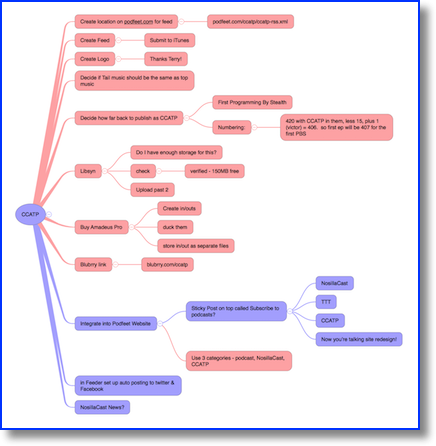 I spent the rest of the week doing all of the nitty gritty details. I decided to go back 2 episodes in Chit Chat Across the Pond so that the first one would be Bart’s first episode of Programming By Stealth. That way if we ever spin THAT one out it will be easy peasy to grab them all!

I created a template file in Amadeus Pro with my intro/outtro music, which is the same on both ends now as what you USED to hear on Chit Chat Across the Pond, and dropped in the two episodes and uploaded them to Libsyn. This won’t hurt me financially because in theory I’m going to be creating the same amount of content each week as before, just split into separate files…but we’ll see about that!

This is a good time to point out that we had to pick new music for Security Lite, so Steve did the heavy lifting here. He bought a whole bunch of royalty free music, so he picked some options and we decided on one from Digital Juice called A Cold World. Hope you like it!

When I submitted the feed to iTunes for Taming the Terminal I expected it to take a couple of days to get in the directory but it showed up in just nine hours. That was great, but unfortunately I’ve been cooling my heels for two days now waiting for Chit Chat Across the Pond to show up in the feed. I was really hoping to have it available for searching by now but my luck didn’t hold up on that! If you want to get a jump on things, you can manually add the feed to your podcatcher of choice. The url is:

If you find that in the shownotes, don’t click it, make sure you copy and paste it to your podcatcher.

I almost forgot – another SUPER fun part of this was deciding how to number the episodes. I didn’t want to start at 1, so I went into WordPress, and did a search for all posts with Chit Chat Across the Pond in them, and then looked at the list and eliminated those that said things like, “no CCATP today…” and I figured out that I can start at #407. Another fun fact to know and tell is that the very first Chit Chat Across the Pond was on November 4th, 200y in Episode #119 of the NosillaCast. 8 years of chitting and chatting!

I think now I’m facing a website redesign. What started as one podcast with one blog post per episode has turned into many blog posts. three shows, and hundreds of details. If you have ideas of how this could look and function I’d love to hear your suggestions. I’m looking specifically for help in the visual layout and function of the site, not the programming behind it. I asked my buddy Niraj to take a crack at it because he’s pretty talented in the UI department. I’m not sure he’ll have time so if you have a talent in that area, do some diagrams and for me? Remember, if YOU don’t do it, you’ll get whatever awful design I think of!

I’m exhausted now, I can tell you that. If you don’t believe me, take a look at the shownotes – I posted a copy of my mind map from iThoughts so you could see what I’ve done and what I have left to do! Oh yeah, gotta get NosillaCast News working to notify folks of the new shows. That might start NEXT week!