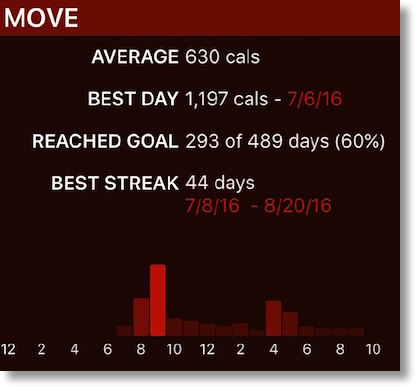 This discussion has caused an awesome effect in the NosillaCastaways. I’ve been getting emails and tweets telling me how people have been inspired. Steven Goetz and I have often talked about fitness (I’m a bore that way), but after Bart was on, Steven said something wonderful. He said:

I like My Fitness Pal because if I don’t have enough calories, I can walk around the block and it gives me more.

I love that statement because it’s exactly the magic of My Fitness Pal. In the app you enter your caloric intake in a really easy to use interface, and if you allow it access to your health data from your phone or Apple Watch or other fitness device, it can track your calories. You tell it how much weight you want to lose (or maintain) and it simply says here’s your budget, here’s what you ate, here’s what you spent in exercise, and here’s how much you have left.

Of course Steven always knew that walking around the block would burn calories, but the simple way that My Fitness Pal explains it makes it obvious that you need to go take that walk if you want that cookie.

It’s amazing how much “exercise” I get just by choosing how to get from A to B. I’m now climbing the 10 flights of stairs in the office about 5 times a week. I enter the foyer and I hear your and Bastian’s voices in my head. I missed my usual walk this lunch time due to some errands but I’m already at 3/4 of my activity goal instead of the usual 2/3 at this time. I’ve climbed the stairs twice today.

Sometimes we just need to be reminded that we could take the stairs. I remember years ago I used to take the elevator down 5 flights of stairs, walk over to the parking structure, take the elevator up 5 flights of stairs, drive over to the gym … only to go on the stairmaster!  Once I heard that voice in my head point out the irony, I started taking the stairs. Thanks Allister, great comment!

It is 8:16 and I met two of my activity goals already. It’s all @podfeet and @bbusschots fault… “

Bart and I discussed this and we decided that we will totally take the blame here. 🙂

Pat Dengler has been wanting to lose weight for a long time. Since these discussions, she got going with My Fitness Pal and using her Apple Watch to track exercise and she’s lost 8 pounds so far. That’s a LOT! (3.6 kg for you metric people.) Now here’s a really interesting bonus prize. She told me that since she’s tracking calories, she’s not going out to eat as much, and she’s found extra money at the end of every week! How’s that for a double bonus prize?

I credit AppleWatch too, and LoseIt. I must complete my circles.

That “must complete my circles” thing is funny in how compelling it is. I remember the same feeling with Fitbit and those darn steps. If my goal was 10K steps and I was at 9950 before i went to bed, you’d find me wandering around my house at night trying to get those last 50 steps!

I have a testimonial of my own. When Bart talked about his move streak of a hundred days on the Apple Watch, I said that I rarely get 7 in a row. I exercise for 45 minutes in the morning and walk the dog for about an hour or so in the afternoon. I would have told you, before this conversation with Bart, that I hit my 600 active move calorie goal usually 5-7 times a week.

Don McAllister told me about an app called Activity++ for iOS that shows a pretty nice display of your Apple Watch activity. I opened Activity++ after talking to Bart about move streaks and found a statistics section. In there it said that I had reached my goal only 40% of the time! That would mean that only three days of the week I was hitting my goal! See how delusional we are? Just like we think we can diet without counting calories/carbs/points and be successful, even as much as I exercise and babble about it to others, I also was delusional.

After I discovered that, I started really doubling down on keeping a streak going. I hit 7 days and got my little happy badge from the Activity app. Then I made 2 weeks and kept going. Lindsay went into labor and I lost hours of valuable exercise time driving to San Diego, but while she was in labor I lapped those hospital grounds over and over again and kept my streak going.

When went back to San Diego to spend a week with her and the baby it got really hard to keep the streak going. I was away from the gym and my lovely beach for walks. In the relatively cool mornings she really needed us to watch the baby while she got some sleep so I could only walk in the 85 degree heat (that’s 29C for you metric people). But walk I did. I couldn’t let that streak die! 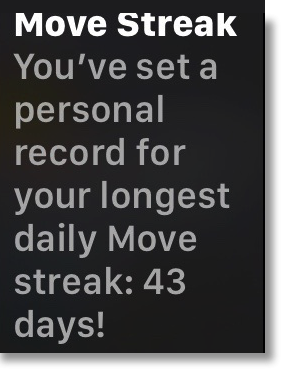 The hardest day was when I’d come back from walking to the store at around 5pm (I’d walked earlier in the day too) and Lindsay, Nolan and Steve were all on the couch happily relaxing with beer. They tempted me … but I turned right around and walked 2 more miles as hard as I could to get those last 200 calories burned and my circle complete. I had that beer when I got back!

I’m now at 43 straight days on completing my move calorie goal, minutes of exercise and even that pesky stand goal! Activity++ now says that I’ve met my goal 60% of the time it’s been tracking me. I’m making progress!

The moral of the story is that we all need inspiration and I’ve benefited from listening to Bastian and Bart and all of you. Now I have to get away from this keyboard and go for a walk!

4 thoughts on “NosillaCastaways Are Getting More Fit and Healthy”