I’ve always thought it might be interesting to look back on all of the products I’ve reviewed over the years and see what I’m still using. That would be a gargantuan effort, given that I’ve been doing this for over 12 years!

But then I thought, maybe I could look at the past year and see what products are still valuable and what just fell away over time and maybe a quick discussion on why. I went through every blog post to see what I talked about in 2017, so here goes.

We started the year with the new TiVo Bolt plus four Minis to replace our plethora of aging TiVos. Just this week Steve and I were marveling at how much we love this setup. Being able to start watching something in one room and finish in another is just fantastic. We paid a ton of money for them, but we only have a monthly bill for one of the devices now from TiVo and our iSP. My return on investment calculations said we’d pay off the new gear in 8 months so we’re already on the winning side.

I told you about how CrashPlan had stopped working for me and so I was trying out Backblaze for my cloud backups. As you all know, CrashPlan dropped its home user plan so I was sure glad I’d already turned on Backblaze. I let my CrashPlan service ride (since it was prepaid anyway). It’s funny though, now that CrashPlan has dropped US, I’m still getting these warning emails telling me I’m not backed up! 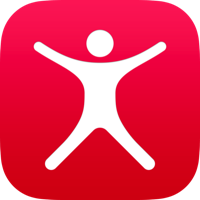 I told you about a great workout app called Workouts++. I still think it’s a terrific app but any app that’s not fully integrated into the OS seems to fall out of favor with me. I love being able to say, “Hey Siri, start an outdoor walk” to my watch and not have to fiddle with the controls. Workouts++ can’t do that and while it had so many other advantages, I’ve noticed I don’t use it at all. 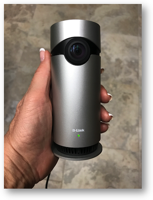 We bought the HomeKit-compatible Omna webcam from D-Link to put in our living room. It’s main purpose is to detect/record break-ins but we’ve been lucky and only use it to watch Tesla sleep on the couch when we’re away. She’s not allowed on the couch, you see, and when we arrive home she runs from the living room couch to lay on the floor in the family room. The camera works just fine and we do play with it from time to time, but I don’t know whether they have upgraded the firmware for the KRACK WPA2 vulnerability yet, and that annoys me. The app says I have the latest update, but I don’t think an update has come out since the vulnerability was discovered. So there’s that. 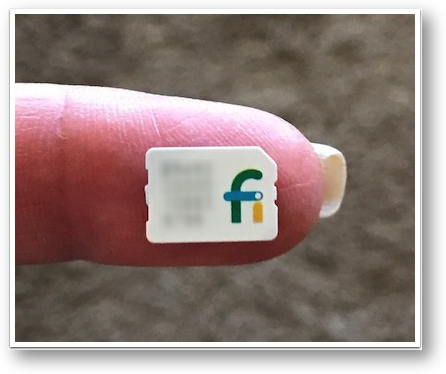 In March I told you how I’d bought a Google Nexus 5X so that I could enable Google Fi SIM cards for inexpensive data on international travel. I didn’t have high expectations that I would get a lot of use out of the Android phone itself, and that has proven to be true. I do boot it up from time to time and I actually rather like it. It is pleasing to use with nice haptic feedback on the keyboard and it’s relatively snappy. It just doesn’t have a place in my life, through no fault of the device.

We did use the living daylights out of those Google Fi SIM cards when we went to the Galapagos Islands and Machu Picchu in Peru, but we haven’t traveled internationally since then. But the cool part is that Google Fi can be paused and restarted instantly through the web interface. When Dorothy (aka Maclurker to the chatroom folks) went to Scotland with her husband Marc, I suggested they borrow the cards. It saved them a trunkload of money vs. getting a local card or paying the exorbitant prices from their US ISP. They both had very fast data, I think they spent under $15 for the 10 day trip, and they didn’t have to spend precious vacation time finding a good deal on a local SIM.

I also loaned them to former research assistant Niraj when he and his family went to Spain. Sadly his wife’s iPhone was stolen shortly after they arrived, with my Google Fi card inside. He was super apologetic but it was literally a matter of a few seconds online for me to log into fi.google.com, cancel the cards and get new ones. As he likes to say, easy peasy. 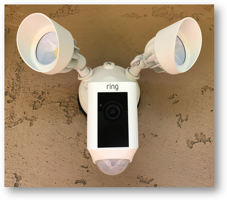 We already had a Ring Video Doorbell, so when Ring came out with their Floodlight Cam, we had to add it to our security arsenal. It’s been a great camera, but we haven’t caught any coyotes or bad guys with it just yet (thank goodness). As a floodlight it works great. I have to say we had it for about six months before I figured out that we had the timing for ring alerts backwards. At night if there was movement, I would never hear the ring, but during the day when Steve went in and out with Tesla it would ring and ring and ring. So yeah, other than operator trouble, it works great! 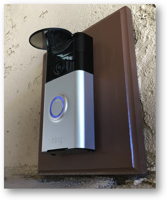 A little later in the year I told you about how Steve made a modification to our Ring Video Doorbell. The problem he solved was that we couldn’t actually see our front doorstep where packages get placed because the dumb camera’s viewing angle is way too high. We are grateful for Steve’s hack literally all the time. My neighbors might not be too excited because whenever we are out of town and someone leaves a package, I know about it and ask the neighbors to pick them up!

We can prove that this hack is necessary, as Ring started selling little wedges to rotate the base away from the wall or downwards. They sell them in different angle sizes too. None of them are nearly as big of an angle as we actually needed (more than 30 degrees) but clearly they know there’s a problem. They could easily fix this in optics but I’ve never been able to convince them of this! Lindsay liked Steve’s mod so much that she asked him to make her one. I think he could make a fortune on Etsy with this mod! 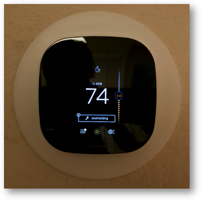 In April I bought the ecobee 3 Thermostat and I’ve had great fun comparing notes on how to manage the temperature in my house with Steven Goetz who lives in Canada. The sad part though is that 90% of the year my ecobee has absolutely nothing to do; while Steven sees super high temperatures in the summer where his air conditioning kicks in and of course freezing cold temperatures for his heater to get a workout. But since I live in a very temperate climate in Southern California, my ecobee has been just waiting for a chance to do something!

While we’ve had some awful heatwaves here in the last few years, whole-house air conditioners just aren’t a thing this close to the beach. So all summer the ecobee has been twiddling its thumbs.

It was very exciting in the last few weeks when the heater had something to do because the inside temperature suddenly plummeted to 68°F from the normal 69. I have paused the heater using my ecobee app on my iPhone so it doesn’t go off during podcast recordings. That’s WAY easier than walking nearly 8 feet down the hallway to flick a physical switch, right?

So, again, through no fault of its own, we don’t get much use out of our ecobee thermostat. If you live where there’s actual weather, it still is a cool product. 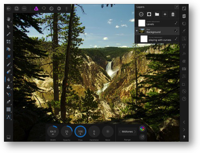 You know I’m crazy about Affinity Photo for the Mac, and I was thrilled when it came out for iPad. I’m in Facebook groups where we yack about it and I’ve converted many of my friends into using it. I have to admit that I don’t use it very often on my iPad. It’s not a bad interface, and it was only $20, but most of the time I do photo work on my Mac.

To be perfectly honest, I don’t even use it that often on the Mac either, at least not the full version. Part of the problem is that Apple Photos has gotten so good that I don’t feel the need nearly as often as I used to. However, I do use the Affinity Photo plugins for Apple Photos all the time. I love the Haze Removal tool and Inpainting to get rid of errant objects. I had a great sunset photo just the other day that had this annoying power line running through it. Took me a while to get rid of it but it turned an ok photo into a great one.

Would you believe we’re only halfway through the year? I think I’ll cut this off and give you the second half next week. Always good to keep you wanting more!