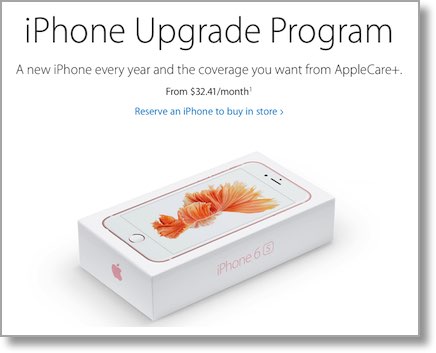 There’s been a lot of talk lately about these new phone plans in the United States where you can pay a monthly fee and get the new hotness every year when Apple (or I suppose Samsung or Microsoft) comes out with their new devices. There are some huge advantages to these plans and I’d like to talk through them while noting that they absolutely positively will cost you more money than other options.

I spent the better part of this week reading the terms and conditions of the carriers, and working on a spreadsheet designed to make it easier to understand. I’m going to go through all the math for you and explain in detail my assumptions, the variables I selected and the concepts, but I realized nobody is going to listen if they don’t hear the bottom line first! By the way, NosillaCastaways from other countries than the US can just sit back and giggle at our newness to buying phones for the real price!

If you really can’t swing paying full price for the phone each year, then the next most expensive option is to use Apple’s installment plan (if you don’t count AppleCare+) and that will cost 21% more than our baseline. Finally, using either AT&T or Verizon’s new phone every year plan, you’ll pay round 30% more to get the new hotness. The difference between getting a phone every other year v.s the AT&T/Verizon every year plan is $400 over four years. 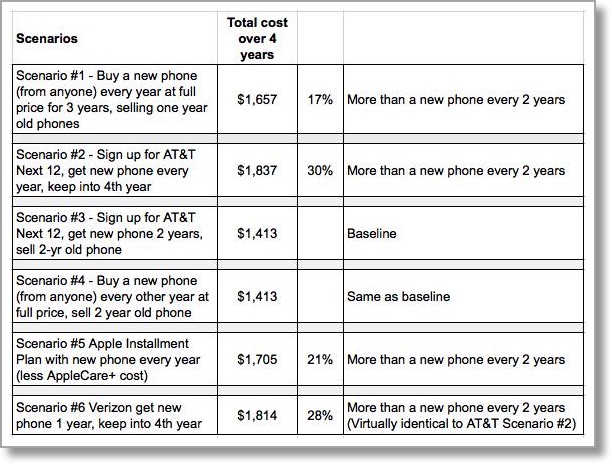 Now that you’ve heard the end of the story, you’re yelling at your phone saying, “why are you qualified to figure this out? why are you qualified to tell ME what to do? What assumptions did you make? What kind of phone did you use for this? What about T-Mobile and Sprint???” Well now that I have your attention, let’s walk through this.

Let’s start by answering the question of what I’m qualified, and unqualified to tell you. I’m qualified to run the numbers because I understand math and I’m pretty darned good with a spreadsheet. My years of calculus in my engineering undergraduate degree and differential equations in my graduate degree will not come into play but perhaps they give me some street cred. What gives me more cred is that I ran a large computing organization and was responsible for a $50M a year budget. This required me to learn from the brilliant finance and business people who I worked with about things like capital investments, and total cost of ownership.

Ok, so I’m a math person but there’s something I am not qualified on which to lecture you, and that’s what you can afford or how you should spend your money. I can’t tell you the right answer for you and your family but I can lay out the options in a way you can figure out which one is right for you. You may pick a different path than me, but you’ll go into it knowing the upside and downside of your decision rather than blindly saying, “I want the new one every year!”

Why the old plans were bad

We should probably spend a quick moment going over why the old plans were bad and why we shouldn’t shed a tear at the demise of the old plans where we got subsidized phones.

Why the new plans are good

AT&T, Verizon, and even Apple are now offering plans that are interest free loans to you to buy the phones. Interest-free loans are a good thing. You get to keep your money in savings while using their money to buy the phone.

If you were to invest the cost of an iPhone for two years, you would make about $18 on that money but they’re not charging you anything to borrow it. Of course over the two years you’re paying the money back, you wouldn’t really have the whole amount invested so it’s not even $18. As you can see the interest income isn’t a material amount of money, but I’m explaining it to help clarify that these no interest deals are in YOUR favor no matter how you look at it.

T-Mobile and Sprint offers plans that are leases, not interest free loans. They’re very complicated, and the monthly fees swing wildly depending on what phone you trade in. For this reason I’m going to keep them off the table and only talk about the loans AT&T, Verizon and Apple are offering. It’s going to be plenty to try and follow the interest free loan model.

I had to make some assumptions going in:

I put all of my calculations in a Google Spreadsheet for you to view, or if you like, copy and edit. If you make a copy of it you can change the cost of the phone if you want say a 6s Plus, and change the tax rate to one appropriate for your state to see if it changes the answer by much.

I ran several scenarios to illustrate the options we have open to us. As much as I’m sure you’re dying to have me go through each line of the spreadsheet in detail, I’m just going to give you the final tally. Like I said up front, I wanted to do this so that people understand that there is a cost associated with the glory and awesomeness of having the new iPhone every year. It is not meant to talk you out of anything or INTO anything!

If we get a new 64GB iPhone 6s through ANY one of these no interest loans from AT&T, Verizon or Apple (or paying full price up front) but keep it for TWO years instead of one, we can sell it at the end of each two year term and then start a new two year deal. It’s important to know that you OWN this phone once the term is up. Technically on the AT&T version you’ve paid the phone off in 20 months so you could upgrade earlier but since Apple only gives us a new one each year I didn’t add that as an option. This scenario is the lowest cost, at $1413 over the course of four years. In four years, you’ve gotten 2 new iPhones and sold 2 old iPhones.

One step up on cost from our baseline is to buy a new phone every year for the full price from anyone you like, and sell your old phone each year. In four years, you’ve gotten 3 new iPhones and sold 2 old iPhones. This will cost you $1657, or 17% more than our baseline.

The Apple Installment plan is next up at $1705 (not counting AppleCare which you do have to buy), or 21% more than our baseline. Again this is 3 new iPhones in four years, but you haven’t had to sell anything because you don’t own the phones, you have to trade them into Apple.

Finally the most expensive options are to get one of the no-interest loans through either AT&T or Verizon and accept the new phone every year. This is the most expensive because you don’t own the phone yet, so you can’t sell it. Over the course of the two years, you’ll spend 30% more than our baseline coming in at over $1800! I was surprised this plan came in around $130 more than the Apple plan and I think I know why. Remember I said I artificially subtracted the cost of AppleCare? I used the list price of AppleCare+ at $129 for two years, but they must be giving it to you cheaper than that. It makes the Apple deal a bit better if you do want to get AppleCare+.

Remember, if you already entered into one of these interest-free loans, you do not HAVE to get a new phone every year. You can just keep paying the payments till the term is up (20 months for AT&T, or 24 months for Verizon and Apple) and then you own your own phone. You have all the choice open to you and that’s a good thing.

13 thoughts on “Is it a Good Deal to Get a New iPhone Every Year?”