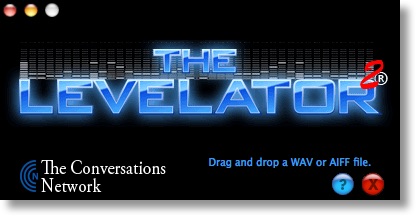 Back in the very very early days of podcasting, there was The Conversations Network, a non-profit headed up by Doug Kay. Doug’s idea was to create a series of podcasts by a global team of volunteers. Imagine the excitement of that age. This is around 2004/2005 when we were just realizing that we were in the wild wild west of broadcasting. We were talking about how the FCC couldn’t tell us what to do, how you could release shows any time you wanted to, no schedules needed. It was a crazy time.

But Doug realized that he had a problem with all these volunteers. They were doing interviews but the audio levels of their voice and the voices of their interviewees was all over the map. Doug dreamed up the idea of a tool that would make the levels the same across all interviews, and got developers, Bruce and Malcom Sharpe along with Norman Lorrain and Russell Heistuman to turn that vision a reality. They created a very simple tool called The Levelator. Volunteer reporters for the network were required to drop their uncompressed recording files onto The Levelator and it would smooth out the audio making it listenable.

The best thing that ever happened to podcasting was when Doug made The Levelator available for free for all podcasters. It became an integral part of every podcaster’s toolkit. Even if you thought things were fine, you’d still run it through The Levelator before publishing. You may have heard me refer to it from time to time, especially if you’ve ever been to the live show (Sunday nights at 5pm Pacific Time at podfeet.com/live. While creating the show, I’ll drop in a listener recording and I’ll play around with the volume a bit but as long as it’s pretty close, you’ll hear me say “The Levelator will fix it!”

Over the years, whenever I would listen to a podcast where I was struggling to hear one voice and then covering my ears because the next voice was too loud, I would write to the creators and beg them to use the Levelator. I remember working with the SMR Podcast guys, the Pocket Show’s Paul Wheatley (I miss that show!) and even the Wired.co.uk podcast’s Nate Lanxon, each of them getting a “talk” from me about The Levelator.

You’d think there’s no problem to be solved here but you’d be wrong. The problem is that Doug and his folks folded up shop in 2010 and abandoned The Levelator. The good news is The Levelator kept working. When it was last released, it was guaranteed to work on everything from Tiger to Lion (10.7). If you’ve lost track of the numbers, El Capitan was released this week as 10.11. We got lucky for 10.8, 10.9 and 10.10 but our luck started to run out on 10.11. Reports flew around the Internet this week that The Levelator didn’t work any more under El Capitan.

But then, a lifeline. chas_m posted in mac-forums.com that a “clever fellow noted that it might be a case of a missing file in /usr/local/lib in El Capitan”. I don’t know who the “clever fellow” was, but chas_m compared the Yosemite directory and the El Capitan directory, and took a copy of the libsndfile.1.dylib file out of the Levelator package and placed it in /usr/local/lib. He restarted his Mac to allow the file to load, and it fixed the issue. Many people have used this fix, but it isn’t exactly a user-friendly solution, right?

I told you this entire back history because I’ve abandoned The Levelator (hey, he left me first). With some help from my friends, I’m in a better place now. But again, some more back story!

A few months back Victor Cajiao of the TerraTech podcast started talking to me about another problem, and that’s the problem of the loudness variation between podcasts. You know the problem, you’re doodling along on your bicycle with an awesome playlist of podcasts and suddenly the next one is way too quiet. You crank up the volume but the next show blows your eardrums out. Paul Figgiani from producenewmedia.com, a good friend of Victor’s is leading the charge to fix this problem.

I’m not a specialist in this field but from what I have learned from Paul and Victor, loudness standards were set for television a while back and that made our lives more pleasant. Not universally obeyed but way better than it used to be. Paul wants to bring this to podcasting and I’m all for it as a consumer of the medium. However, when Paul talked about it for podcasters, it was WAY WAY WAY too hard to understand how to comply with this mythical loudness standard of which he speaks. I’m pretty geeky but it was beyond me how to comply. I told Victor I was on board, as soon as there was a button I could push that would make my podcast comply with the standards.

About a year passed, and just recently Victor told me that Paul told HIM about a tool that would finally give me that one button push to comply with the loudness standards. Better yet, it would also level the audio much like what The Levelator has been doing all these years. The app is called Auphonic Leveler from auphonic.com. Georg, the developer, has an interesting business model for Auphonic. You can use it as an online service where you upload your files to their server and run the tool against it and get delivered a processed file, or you can buy the tool for your desktop. 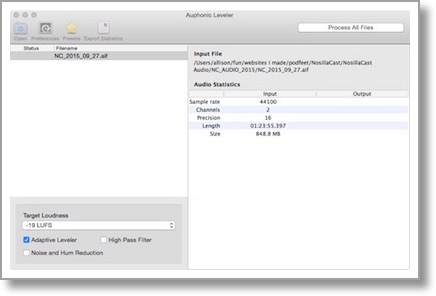 The online tool is free if you only need two hours a month of audio processed, but they have pretty reasonably priced options for more time, like $11/month for 9 hours of audio processing or you can buy credits in packs and use when you need them. The credits are probably a good deal because you can use the 2 hours free first and your credits after that.

I don’t like monthly payments though, so I bought the standalone tool. You’re going to cough at the price – it’s $89 for personal and non-commercial use. I do make a very small profit off the NosillaCast (especially now that I can’t throw a party for the NosillaCastaways every year at Macworld) so I wrote to the developer, Georg, who said that it was fine for me to buy the personal license. They have a commercial license that’s $349 for up to five users. 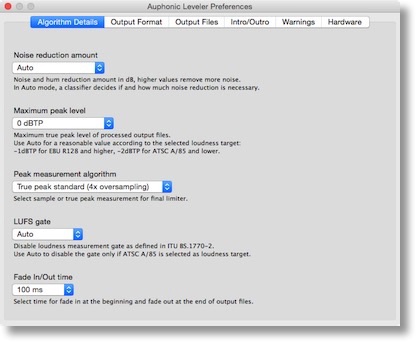 At first I had buyer’s remorse about the $89, but as I worked through how to use the tool with Victor I realized how much Auphonic actually does. As mentioned it does the loudness compliance and leveling, but it will also convert the file to an mp3 so I don’t have to go through iTunes to do that. It will also processor audio to remove noise and hum. I have pretty clean audio but once in a while there’s a problem with a recording from someone else. Last week, George from Tulsa’s recording had a rumble underneath his audio that wasn’t bad but when I heard it during the live show as I assembled the recordings in GarageBand, I thought I’d give Auphonic a test real time. I dropped his original wav file into Auphonic, clicked the box to denoise/dehum and left it set to “auto” and in just a few seconds I had a beautifully clean recording. I’ve tried to use denoise filters before and the recording ALWAYS sound weird afterwards, but not with Auphonic, it was perfect!

Steve has been helping me try to perfect the settings in Auphonic, starting with what Victor taught me. Steve noticed two weeks ago that my audio sounded harsher than it used to and we think it’s because I have a compressor on my voice in Audio Hijack as it’s being recorded, but Auphonic is applying a peak limiter after the fact as well. Both of these tools help keep the maximum peak level of my voice from going too high and we think they were fighting with each other. I’m not sure we’ve got it perfect just yet but we’re working on it.

I wanted to tell you all about this not because I expect you to go out and become a podcaster (it would be awesome if you did) but rather because I think it’s an important lesson to think about the tools you love and use and have a plan for what you’ll do if they go away. I ripped the bandaid off quickly when Apple abandoned Aperture and I was rather pleased with myself that I’d converted to Auphonic before The Levelator died.

My next project is to figure out how to replace GarageBand 6.0.5 in my workflow. I really do need to get off of it since it’s been abandoned for more than a year now with the new and totally useless for podcasting version! And finally, the best part, this massive change in my workflow means that Dorothy has something new to script for me!